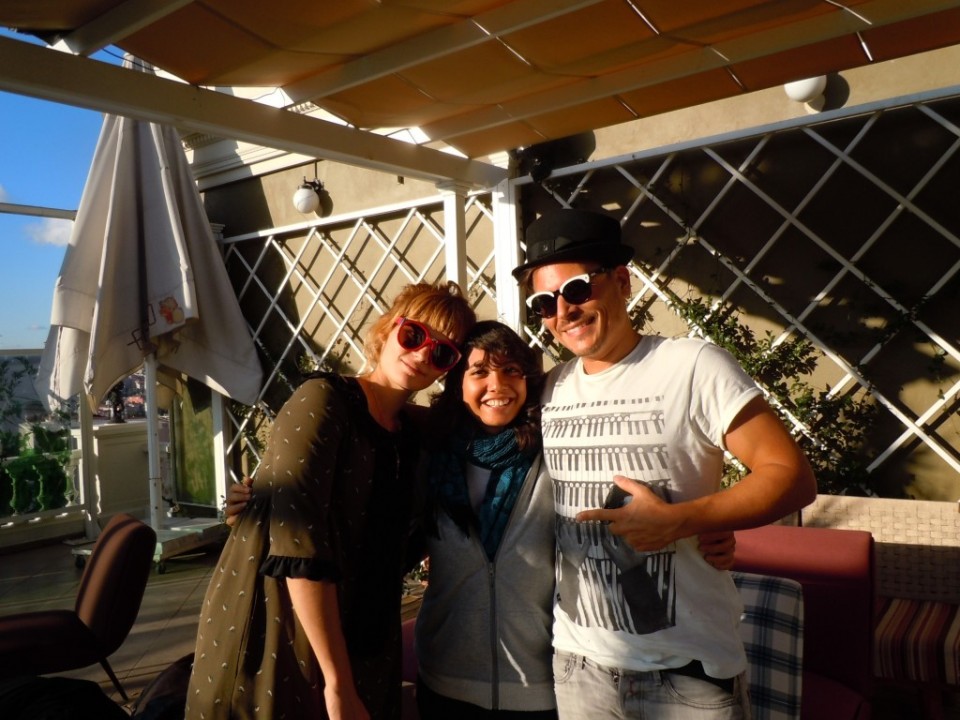 Q + A with The Do by Hayalsu Altinordu

DISCOSALT: Hi there! It’s been such a long time for me, since I first saw you guys. It’s great to finally meet you!

Dan: Which festival was that?

D: It was Eurosonic Noorderslag festival in Holland.

D: No, It was in Groningen. Nice festival but it was quite cold at that time. You were touring for so long in Europe and the USA. How did you find time to record in all that time?

O: Actually that’s a good question. Everybody kept asking like why it took us to record so long but actually it took us only 1 year to record. But yes we toured for almost 2 years for the first time. It was a long time. And we were impatient to record new songs.

D: Where did you record the new album “both ways open jaws”?

O: We started recording in the house we rented in South of France. We started for a few weeks. We took all our stuff from the studio and rented a truck. We started going around with that truck and also different musicians came there to work with us. It was very important for us to get away from Paris and being in a new environment.

D: What do you think about Paris these days? I’ve spent the last 2 summers there and I find it much more touristy now compared to 10 years ago.

O: That’s true. I think Paris is going down. We want to move somewhere else soon but we are not sure where it will be. Maybe to Berlin.

D: Olivia, you are from Finland and Dan, you are from France. I assume that most of your time is spent together because of the tour, but when you are not touring…do you still spend time together?

D: We do music very often, so most of the time we are together. But when we need we take some time off and go apart, we do.

D: And when you are on tour for a long time, who is your best friend?

O: I don’t know. I can’t focus on a book when I’m touring. I can’t really actually focus on something else.

D: Normally, when you are on a tour, our best friend is our bed. We are so tired that when we have time to sleep we are extremely happy.

O: It’s also good to have good headphones. Listen to your own thing.

D: Who do you listen to these days?

D: Micachu and The Breeders.

D: On your new album, there are two songs that stand out for me, which I love: “Bohemian dances” and “was it a dream”. Can you tell us the story behind those songs?

O: I remember I wrote Bohemian Dances when I was very sick. I wanted to break free, go out and start singing again. I was so bored. It was like a freedom anthem for me.

D: “Was it a dream’s” story…We wanted to make an old school song. And nobody is dancing slow these days.

D: Olivia, this question is for you… Your style is very interesting. Do you choose your clothes or does somebody else choose them for you?

D: What was the first album you bought?

O: I remember that the first I bought was with my brother. Michael Jackson: “Dangerous”.

D: Mine was also from Michael Jackson: “Thriller”.

O: Was that on tape or vinyl?

D:: Can you feel the groove tonight! We just want to say that like a thousand times a day.

O: Oh it’s a long story. But you know you find the most cheesy video on Youtube and you keep watching it and it becomes a habit.

D: Do you have any secret talents?

D: Yeah? What can you cook?

D: Whatever you want.

D: So if one day you decide to stop being a musician, you always have a second job!

D: My parents have a restaurant for 35 years, so I have a talent.

O: Can we be the Beatles?

D: No! Everybody wants to be The Beatles.