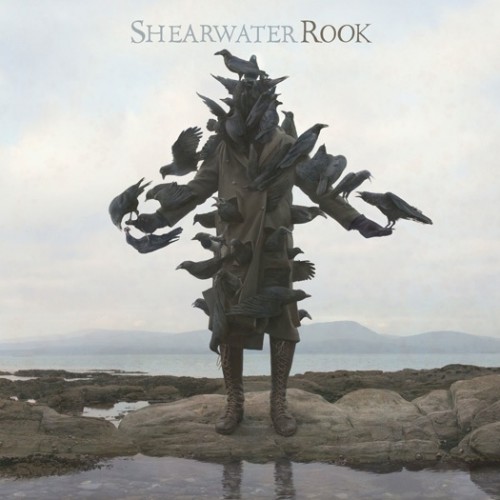 Consider Rook essential summer listening. Like your “Summer Reading” list, Rook isn’t really “summer-y” at all. It’s heavy, dense, dramatic and beautiful and dark. Four of those five adjectives actually DO apply to summer, come to think of it, but i’m thinking more of the “essential summer reading” lists. Notice those books skew more towards Tolstoy than the Nancy Drew (or my personal favorite, Skinny Bitch in the Kitch), and I think summer listening should do the same. Nothing really works better than the antithetical when wrapped in the world of the iPod, wrapped and enraptured into whatever world you choose, and with Rook, the marked contrast from the world outside and the world inside, i.e. inside el cerebro, is simply divine. Divine Tragedy, but divine nonetheless.
The tragic and dramatic qualities of Shearwater jefe Jonathan Meiburg lie most obviously in the both soft, falsetto vibrato and the gigantic, shouting abandon of his voice. In all fairness, Meiburg’s voice is one that will make or break Shearwater for any listener (think 1 part Scott Walker, 1 part Morrissey & 1 part Will Sheff. Shake and Pour), like a Joe Pernice or a Joanna Newsom; in other words, singular and unique. And while Rook shares some qualities with his other band, Okkervil River (DRAMA!), it also is much larger and grand than the songs of Will Sheff. The vocal drama comes out, in both ways, on penultimate song “The Snow Leopard,” as verse one is built upon a sparse piano melody and Meiburg’s falsetto, and verse two turns on the drums, turns up the guitars and turns UP Meiburg’s gorgeous vocals. The musical drama comes out most emphatically on “Leviathan Bound,” and is my favorite dramatic piano reading since Midlake’s channeling of the theme song from M*A*S*H on “Roscoe.” “Leviathan Bound” sounds like the theme to an unrealized soap opera, but think along the lines of The Young and the Restless and you’re on your way; this song is also another soft/loud vocal opportunity for Meiburg to carry the melody.

In “Home Life” Shearwater paints a solitary portrait of youthful wanderlust, telling the narrator “you were tracing the lines on the globe with your fingers. Cool rivers, white waves, desert shores and the forest green, and a limitless life.” The limitlessness is heavily scored with flutes, violins, the ever dramatic piano and tasteful and dynamic drums. This portrait of isolation is emblematic of the songs on Rook, and while not sparse (the orchestra is a huge part of what makes these songs not only dramatic but achingly gorgeous), this isolation is akin to the heavy nature of these heavy tomes we pick up as summer reading. All summer listening should be as dense, challenging and rewarding as this record, and if you don’t make it this summer, Rook will keep until next summer and many summers after that.