IRON AND WINE: THE SHEPHERD'S DOG

IRON AND WINE: THE SHEPHERD’S DOG 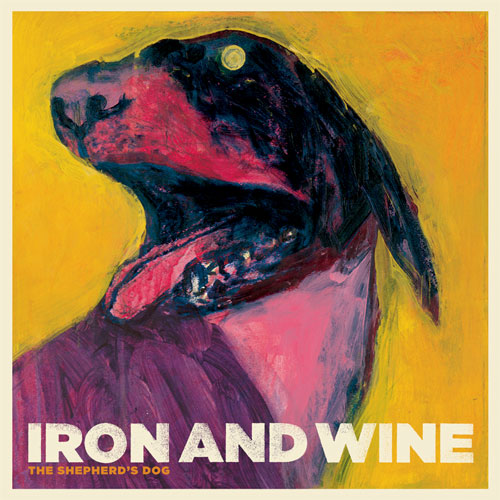 Iron and Wine: The Shepherd’s Dog

I guess the thing that struck me most about The Shepherd’s Dog wasn’t the studio production (slick) or the effects pedals (lots of wah wah) or the plugged in-ness of it (Sam Beam went electric a long time ago). No, I guess it wasn’t the funk song (?), or the honky tonkin’ piano (“The Devil Never Sleeps”) or the lyrical imagery (Jesus, dogs, and birds are still hangin around in these songs). Yeah, I think that struck me most about The Shepherd’s Dog was the addition of the ethereal 10 cc-esque background vocals on “Innocent Bones.” Not that the album is not striking, both in it’s adherence to the traditional Iron & Wine formula and it’s stark change from said formula, but the angelic “ooohhh”s, they really stopped me in my tracks.

And what of the songs? Is it so much to NOT expect Sam Beam to be channeling Curtis Mayfield on “Wolves (Song of the Shepherd’s Dog)”? To NOT expect to hear a song that sounds exactly like it belongs right in the middle of the Iron & Wine Songbook (“Reserrection Fern”), but could possibly one of the prettiest songs of the year and definitely one of the most beautiful Sam Beam has ever written? The addition of the varietal of sounds & instruments to the sonic palette of Iron & Wine is certainly unexpected, but is surprisingly welcome. The storybook Americana that exists within the world of Iron & Wine is still populated with grandmas, star crossed lovers, sinners, saints, gamblers, harlots, Jesus, and, yes, lots of dogs. The songs still have lots of room to breathe, and the vocals still barely sound as if they rise above a whisper, but the song structures are no longer rooted in an Americana structure.

What differs, very pleasingly differs, is the literal jump from the rootsy folk-country foundation that Beam’s songs are usually built upon, this jump happening at the beginning of the record. Opener “Pagan Angel and a Borrowed Car” begins with a very typical Iron & Wine acoustic groove, but sounds as if it’s being broadcast from an AM radio. When the strings (and drums & psychedelic guitars) kick in, the difference is apparent, and by the time the record ends (with the absolutely gorgeous waltz “Flightless Bird, American Mouth,”), the difference is welcome. By retaining what made Iron & Wine unique, and by embracing the studio and it’s many wonders (and musical instruments) and his singular vision & voice towards what a song means and can do, Sam Beam has crafted one of his best albums and has taken a step into uncharted territory. I literally have no idea what comes next for this band, and that’s exciting. Not knowing what the new Iron & Wine album is going to sound like is both pleasing and unexpected, and that newfound unpredicability makes The Shepherd’s Dog a giant step forward.