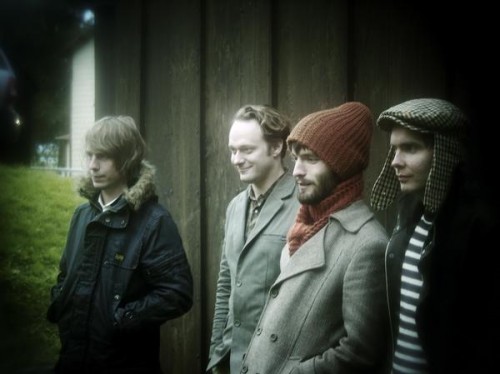 On Tuesday evening, myself and several friends joined the lucky swarm of hipsters invading the Museum of Modern art on 53rd st. I’m going to come right out and say it: MoMA isn’t an ideal setting for a concert, as there was no stage, although there was free beer. The show was unusually long (maybe two hours?) but I had no sense of the length until I got outside and it was past 11. The concert was in conjunction with the exhibition Take your time: Olafur Eliasson, an exhibition which featured works of this Icelandic contemporary artist. Sigur Ros and Olafur Eliasson are an interesting parallel to draw in the art/music consortium. Sigur Ros’ music creatures textures and landscapes primarily using instrumentation and rhythm, forcing the listeners to draw conclusions without verbal cues. Eliasson similarly creates environments and space using lights, spacial relations and mirrors. His compositions don’t contain any symbolic or concrete imagery that the viewer can identify as scenery, rather he alters one’s inner sense of space creating a fantasy environment of space and time.

One thing that really set this apart from a regular show (although having no history with SR, I can’t compare to their usual sets) was an absolutely exceptional light show. I have virtually no idea how lighting design works, but I was very impressed. Without theatrical lighting, SR can create create suspense and longing, with the visual cues, it was an all encompassing experience. The lighting was primarily composed of several lantern like orbs that were behind a glass wall in an exterior courtyard. The orbs were a soft, warm light at their “home state” and as the mood of the music called for, the quality of the light would change. Ranging from a very yellow soft tone to an industrial, harsh blue. There were also gels that looked like moonlight through a summer forest, creating moving shadows that imitating the rustling leaves. They were absolutely beautiful. At one point, they employed a green back light that brought the whole courtyard to an emerald glow.

If I had a better position at the front, near the stairs, I would have had the pleasure of watching the marching band approach, in full white uniforms. There were four of them, that comprised the horn section and they entered with such theatrical grace, the whole audience was completely overtaken with thrill. It was a nice, ironic touch. Here is the BV link with lots of great pictures.

I am overwhelmingly excited to see them again in mid september at the church in Harlem. Yeah, you know, the ornate one, with no windows. On the corner.