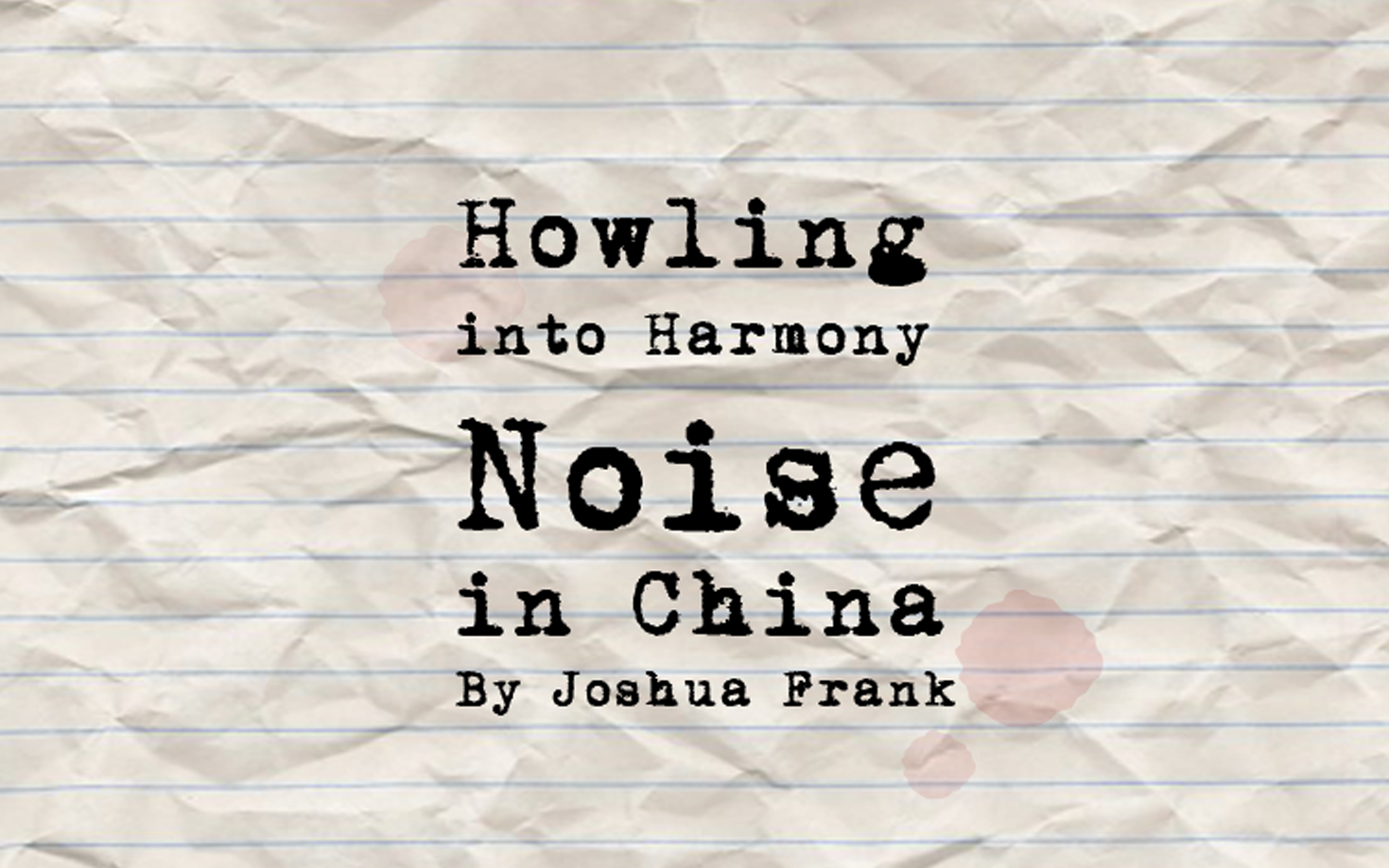 Howling into Harmony: Noise Music in China by Joshua Frank

Li Yang Yang’s music commune occupies an active fish hatchery in the industrial outskirts of Beijing. A bastion of psychedelic noise and rock n’ roll, it is the focal point of a group of musicians across China devoted to fearless experimentation and feedback-laden performances. Xiao Leiyin, as the space is known, gets its name from a temple in a Chinese folk tale, where monsters and spirits congregate. In English, the commune is referred to as Raying Temple—a place emitting rays of light.

The son of farmers in rural Shandong province, Yang Yang moved to Beijing in 2003 with little more than an electric guitar. Inspired by the writings of Jack Kerouac and William Burroughs, he gradually amassed a coterie of musicians united by their penchant for the improvised, atonal and arrhythmic. The collective called themselves Nojiji—”No Dicks” in Chinese. Still active today, their output runs the gamut from lysergic drone to cymbal-smashing free-jazz.

Yang Yang and other young musicians in Beijing’s small but vital experimental rock scene are the focus of a documentary, Howling into Harmony, that I filmed over the course of the summer of 2011. If Yang Yang takes a certain glee in obliterating musical convention, other artists are less markedly extreme. A college student living with his parents, He Fan is the front man of Birdstriking, an up-and-coming trio that laces anthemic lyrics into wall-of-sound guitar rock. More pensive and restrained, sound-builder Li Qing of local duo Soviet Pop coaxes
whirrs and oscillations out of an array of vintage synthesizers painstakingly collected on eBay.

I first became acquainted with the Beijing scene in 2006 while attending high school in India: my band at the time started swapping Myspace comments with another of Li Qing’s projects, Snapline. Our shared love of early post-punk groups like the Fall and Joy Division dissolved any sense of a language barrier—we corresponded in band names and song titles, not in English or Chinese. The same year Li Qing and I first made contact, my family moved to Beijing. I started learning Mandarin and going to noise-rock shows.

For foreign observers of the Chinese scene, it can be tempting to indulge in a series of reductive tropes: rock as the ultimate political statement in a totalitarian regime; Chinese punks as naive, authentic foils to style-obsessed Western poseurs. The fact is, from Beijing to Brooklyn, most of us form bands for the same reasons: it’s fun, it’s cool, and self-expression means making a terrific racket.

What is political in a certain sense is that musicians like Yang Yang, Li Qing or He Fan choose to play music at all. Much like in the West, Chinese parents don’t exactly dream of their kids becoming rock stars. Success means owning property, buying a car and getting married. An engineering degree will get you there; being able to bash a drum kit might not help. “I do think it’s important for people in society to play rock music,” observed He Fan’s father, He Dongping. “But to have our own son playing rock…you could say we weren’t quite prepared for that.”

Beat Generation–obsessed Yang Yang offered his own interpretation. “Kerouac’s 1960s feels a lot like China today,” he explained to me while browsing translations of Foucault and Derrida at a bookstore in his backwater hometown. “Young people are starting to have ideas that were incompatible with their parents’ generation.”

In an age of file sharing and micro-blogs, it should come as little surprise that there are twenty-somethings in China who have heard everything from the Ramones and the Velvet Underground to Atlas Sound and Animal Collective. These kids have cool guitars and retro Chinese sneakers—they make music on their iPads and probably bought the same pair of jeans you’re wearing for ten bucks at a wholesale market. What makes rock and experimental music culture in China so fascinating is that on a certain level, it’s just like anywhere else.

The subjects of my film may be Westernized, but they’re also ineluctably Chinese. “I think all ideology is crap,” He Fan told me in his childhood
bedroom. “[In democracy], people try to use you for their goals, too. You have to keep your mind clear.”

There is a sense of national identity independent of Party politics, the sanitized Internet and weathered Mao statues on university campuses. “When I play guitar, I can call it Chinese,” asserted Yang Yang, the morning after a particularly wild and discordant set. “I don’t need to sing a folk song or play a traditional melody. That’s just a musical form. There’s nothing Chinese about it.”