Ava Luna : “Nowhere” isn’t such a bad place to be 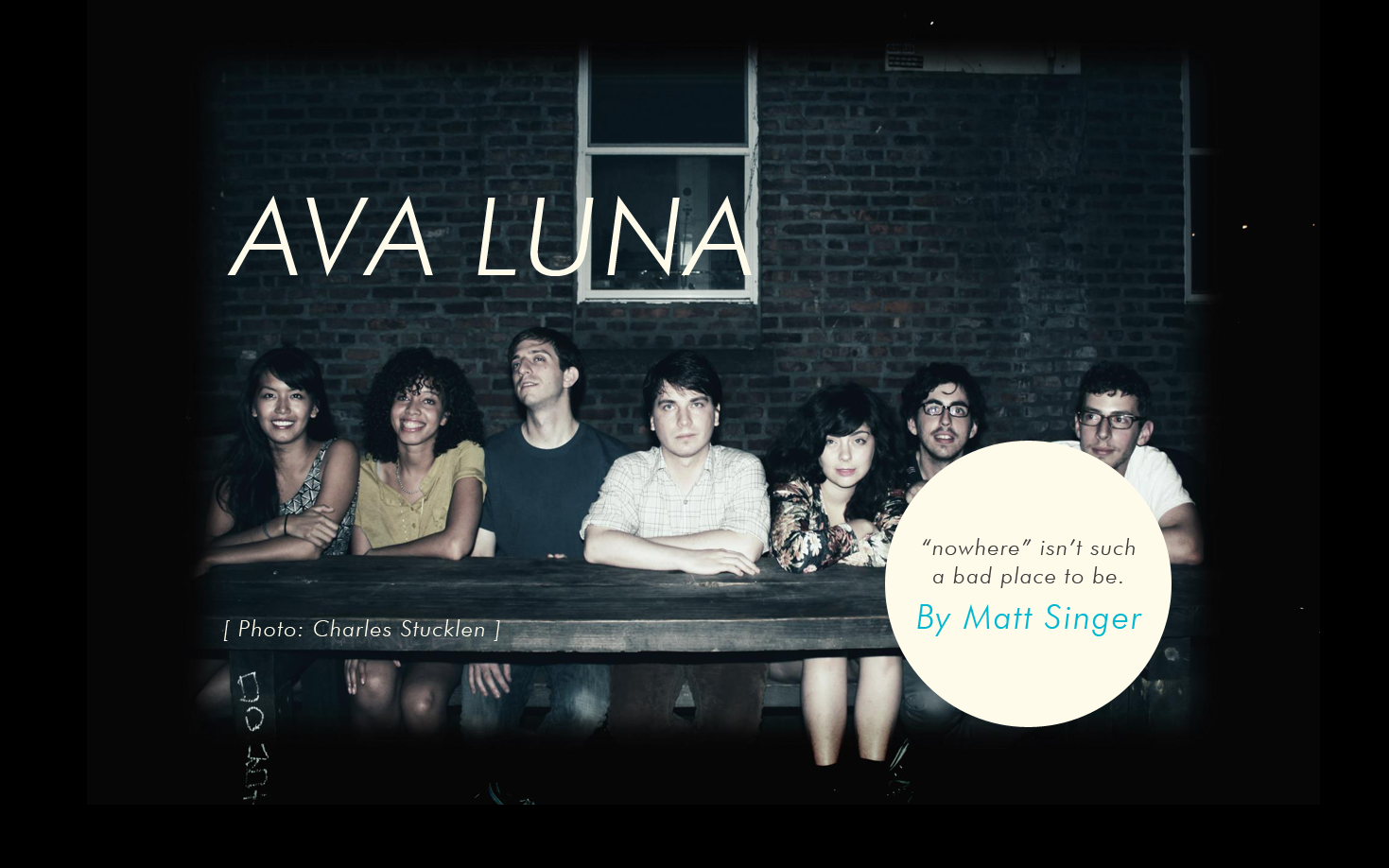 Ava Luna : “Nowhere” isn’t such a bad place to be by Matt Singer

Ava Luna’s Carlos Hernandez talks a lot about growing up in “cultural isolation.” Even though he’s spent his whole life in New York City, to hear him describe his upbringing, you’d think he were raised on another planet. His family didn’t have cable. His father was (and still is) a soul DJ, so he never heard the classic rock staples his peers absorbed at an early age via their parents. As a kid, Hernandez mostly listened to and played classical music; he didn’t discover punk until after college. Oh, and for a time, his mother dabbled in Santeria, and once sacrificed a live chicken in their living room, though Hernandez says that’s “not totally relevant.”

Considering all that, it’s understandable that when it comes to navigating the New York music scene, Hernandez has sometimes seemed like an outsider—such as during the first failed incarnation of Ava Luna, when he thought the path to success ran through the bars of downtown Manhattan.

“That’s not where you go to hear bands,” he says now. “I had always heard, ‘Oh, all the music’s happening in Brooklyn.’ Well, I’m from Brooklyn, and I didn’t see any of it. It turns out it’s just because I didn’t know anything.”

Knowledge, then, is what powers Ice Level, the reconstituted Ava Luna’s killer full-length debut. It’s the result of a year Hernandez spent getting to know his own city: going out every night, exploring the edges of the Brooklyn art world, and making a concerted effort to consume as much outre music as possible. Emerging with a completely altered perspective on songwriting, Ava Luna became a place for Hernandez to try and reconcile his populist past with his avant-garde present—a convergence point for his newfound love of abrasive, minimalist noise and the classic ’60s and ’70s R&B that informed his childhood. On Ice Level, those contradictions in style meet in a bracing collision. It’s a deeply soulful album—Hernandez’s warm, anxious voice supported by classic girl-group harmonies from the band’s trio of backing singers—but it’s also violent, dissonant and tense. At once organic and mechanized, sweet and sharp, it doesn’t sound quite like anything else, unless you can think of another band that matches the Village Voice’s apt description of “Stax meets Kraftwerk.”

That’s a long way from where Ava Luna started. Hernandez’s first recordings, under the name Ava, were intricate, glacially-paced compositions, essentially Sigur Ros-as-bedroom pop. In 2007, Hernandez partnered with synth player Nathan Tompkins and drummer Julian Fader for the electro- rock-leaning Lemming. Despite having a lot going on, it was a record without much of an identity. “We didn’t really know what we were doing,” Hernandez admits. Taking time off in 2008 to “figure out how to be in a band,” Hernandez embarked on his year-long odyssey into the N.Y.C. underground. When Ava Luna reconvened, the notion of integrating female voices into the band’s minimalist setup occurred to Hernandez almost on a whim. “It was just an idea,” he says. “What if there were a band where the only instruments were a trio of vocal harmonies, plus a really noisy synth-bass and drums?”

Recruiting three longtime friends to sing backup (after some turnover, it’s down to original member Felicia Douglass and later addition Becca Kauffman), the band announced its new direction with a pair of well-received EPs. Generating local buzz with the nervous energy of its live shows—and by finally playing the right venues—the group made inroads with the indie cognoscenti, and even made a fan of hip-hop mogul Damon Dash (long story).

As Hernandez’s journey of artistic self-discovery helped Ava Luna find its sound, another journey informs Ice Level. After splitting with his long-term girlfriend, Hernandez moved around a lot, to put it mildly: He lived in five different apartments in the span of a year. Appropriately, much of the album deals with the struggle for belonging. It opens on a destructive note: Written just after his breakup, “No
F” reflects, in Hernandez’s words, his desire to “take something dear to me and fuck it up.” With fluttery synths and stabs of guitar, the song nods toward his love of Al Green before immolating itself in a haze of calamitous noise. It’s followed by the beautifully hungover title track, half sung by Kauffman and featuring a swelling, Serge Gainsbourg-esque string arrangement. “The Year of Mirth”—how Hernandez refers to his time as an urban nomad—builds from a woozy lurch to a bright, dreamy climax. And the clattering “Calculus” bookends the record with more destruction, this time literally: The lyrics reference the flood that destroyed the last apartment Hernandez lived in during that “year of mirth.”

It might sound like a downer, concluding an album about the search for home with a song describing sudden, swift displacement, but that’s the ongoing reality for Hernandez: Once you escape from cultural isolation, the challenge is finding where you fit in. “And I guess the answer is still nowhere,” he says. Maybe. But if that’s where a band like Ava Luna comes from, perhaps “nowhere” isn’t such a bad place to be. 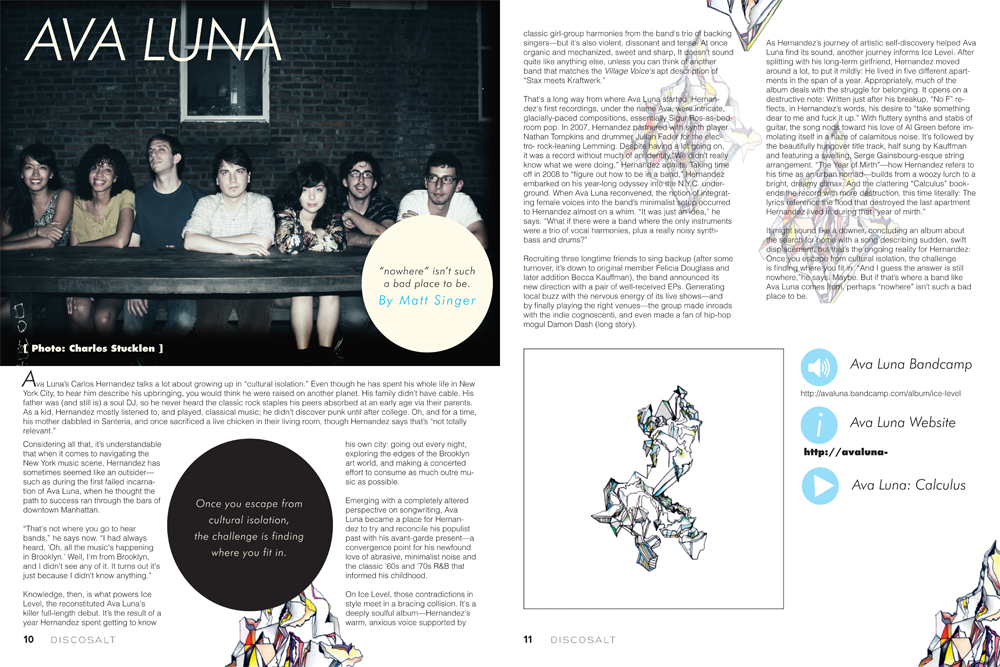 ← I saw God and/or a Screensaver
Elizabeth Weinberg →