Held Friday, June 6th through Sunday, June 8th in Randall’s Island Park, the 4th annual edition of New York City’s premier music event will showcase a wide spectrum of Dance, Indie Rock, Hip Hop, Americana, Electronica and Pop all weekend long. In a nod to the vibrant music scene in the beautiful city Governors Ball gratefully calls home, this year’s lineup also features a large contingent of established and up and coming local NYC artists, including among others, Interpol, TV On The Radio, Vampire Weekend, Julian Casablancas, Sleigh Bells, Lucius, Haerts, and The Strokes who were confirmed for the festival this week and will play their first show in NYC since their 2011 Madison Square Garden gig.

You can look forward to three days of music, art, and entertainment featuring: 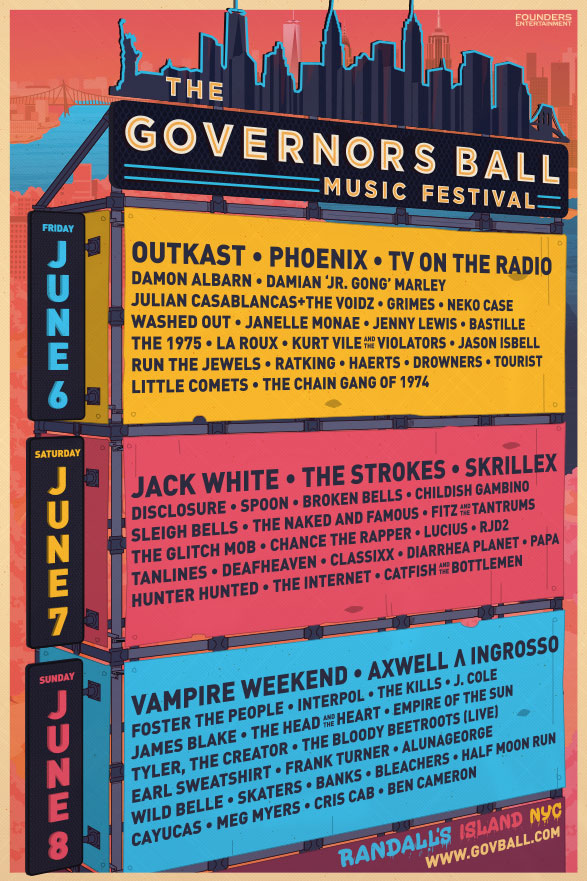 Last year’s sold-out 2013 edition of the festival cemented Governors Ball as a “major contender” (Rolling Stone) among North America’s premier music events. In three short years Governors Ball had grown from a one-day event with 12 acts in 2011, to an all weekend three-day affair featuring a world class lineup of the most compelling and in demand performers around. Considering New York City’s reputation as a notoriously challenging market, the success of Governors Ball has been incredible and humbling for NYC based festival producers/owners Founders Entertainment. Each year they strive to repay the support of Governors Ball patrons by working tirelessly to expand and improve the festival experience for attendees. Founders Entertainment will host a Reddit AMA to take feedback and answer questions from Governors Ball patrons between 2 and 4 pm EST on January 22nd.

The coming 2014 festival will build upon the size and scope of last year’s programming, and Founders Entertainment are also expanding the festival site: allowing attendees to spread out and enjoy new and improved performance spaces, unique art installations, revamped high-end food and drink areas, and an improved location to savor offerings from some of New York City’s best food trucks. And of course as in years past, the festival will include a wide array of Governors Ball’s popular summer-time activities and lawn games among other attractions.

This year’s lineup also pays special homage to the great city Governors Ball calls home. “New York City is the greatest city in the world, and we’re blessed to call it our home,” says Founders Entertainment partner Jordan Wolowitz. “We’re thrilled to showcase some of NYC’s greatest homegrown talent at Gov Ball this year. From The Strokes, and Vampire Weekend, to Sleigh Bells, Ratking, and Lucius, we have some of our generation’s greatest NYC bands on board to slay the masses. It’s gonna be a great weekend.”

Founders Entertainment is once again honored to invite attendees to Governors Ball’s festival grounds at Randall’s Island Park. In addition to being accessible by bus, foot, bike, car, and cab, the festival will again offer ferry service from Mid-Town Manhattan to and from the festival grounds. With each subsequent year of the festival, Founders Entertainment has utilized experience and feedback from previous years to ensure transportation to and from Governors Ball is as smooth and easy as possible.