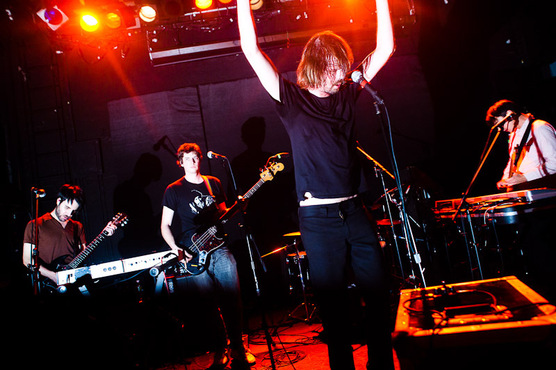 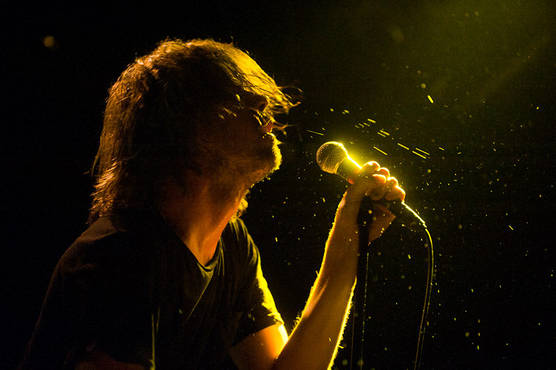 Upon initial listen, Liars sound rather hardcore and angry, and you know me, I shy away from hardcore. Lately though I’ve been signing a different tune, I have started to get into lo-fi, which has led me closer to noise rock and hardcore.

So with a little nudging from the deeply trusted Nana, and some other music friends, I decided to go see them at Bowery Ballroom on 4/15/10. If I don’t like them at Bowery, then they just aren’t for me. I really gave their 2007 ST album a few good listens before the show. At Jeremy’s recommendation I started with the last track, Protection. It’s the softest and most melodic track, and really demonstrates the depth of what Liars are doing. Before the show I was still not 100% on board, but hey, I love shows, so nothing to lose.

We got there just in time for Liars. To me they seem to be a great paradox: the sound doesn’t match the act of the band. This can be either a good thing or a bad thing, in this case it’s a wonderful thing. They clearly work really hard to build the sound they create, and do it with fervor and enthusiasm. Front man and lead singer Angus Andrew has incredibly long forearms, and when he dances he looks a bit like a transvestite orangoutang, very feminine and little awkward. I loved his dancing, it really defined the paradox: post punk meets Brittany Spears? Also, Andrew is totally raging on stage, and sweats like crazy. He would be still for a moment and then start head banging, and it was like a backlit shower. In the meantime, while Andrew is on stage rocking out, the crowd was essentially moshing in the front. Their music does have some violent undertones (“Blood, Blood, Blood” from the track “Broken Witch”) but also some sweet moments. Part of me wonders if it is intended as sarcasm and humor, validating the fact that upon first listen they are merely a hardcore band, but in reality they have a serious musical background and strong theme.

They were having fun onstage, and being badass rocker pirates has nothing to do with the image, and everything to do with the music. They were incredible onstage, created such energy that I am considering seeing them again at Music Hall of Williamsburg on Sunday. They make me want to run out and see Fuck Buttons and No Age and every other angry band that I previously thought I didn’t want to see.

Have a nice weekend Lovies!

(all photos courtesy of Ryan Muir)