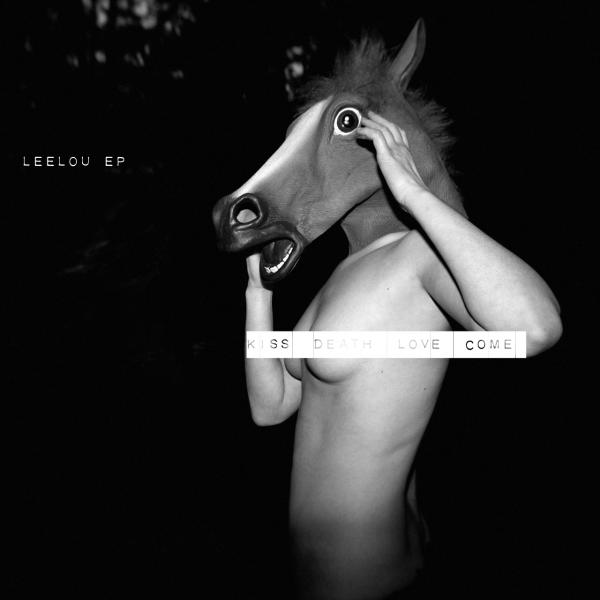 ‘Kiss. Death. Love. Come.’, the debut release from LeeLou (aka Rebekah Dobbins) is reminiscent of the carefully crafted post-punk sound that harks back to a time when pop artists were exactly that…artists. Intelligent and exhilarating, there’s a substance to the music so often lacking in today’s chart fodder. Like Siouxsie and The Banshees or The Cure, there may be a brooding aesthetic that packages this innovative music but their uncompromising songs bleed positivity and hope. LeeLou’s powerful voice tears through the rich tapestry of Paul Simm’s production to create inventive and adventurous pop music that cuts straight to the core.

Inspired by the MP expenses scandal of 2009, lead track ’Burn Your Houses Down’, is a visceral assault on the senses and a revolt against the carefree, nonchalant use of money by those who have plenty of it. Lyrically sharp and witty, the song translates into a powerful slice of socio-politically fuelled pop. The bass parts on the track were recorded with a little help Tessa Pollitt of the seminal female post-punk trio The Slits. ‘Kill For Your Love’ is a powerful song that reflects a timeline of memories. Dark and brooding, its subject matters are escapism, fear and the craving for love. The rousing third track, ‘Gasoline’ explores the idea that no matter how tough a situation may become, we stay strong in the face of adversity and keep shooting for the stars, holding our dreams and aspirations tight. The closer ‘Kiss Like Carnivores’ discusses mutual indifference to something or someone, using and being used and our acceptance of that. Dark, edgy and effortlessly cool.

Turning her hand to singing, song writing, and poetry from an early age, Rebekah exudes natural talent and breathes the arts. Her profound use of verse to express herself has long been a cathartic outlet for her emotions and remains to this day a prominent part of her daily life. Citing her influences as everyone from Ted Hughes to Vivienne Westwood, she formed her first band at the tender age of 12 and has been on the stage or in a studio ever since. Creativity courses through her veins. Raised by her single mother, the male figures in her life was made up by her brother, Jack Kerouac, Charles Bukowski, Ted Hughes, Thurston Moore and Kurt Kobain. With such musical and literary rebels pointing the way, she found herself drowning in excess but escaped by moving to a bigger pond. In an attempt to shed the skin of her hometown of Devon, she soon found herself heading for the bright lights of London in search of some like-minded souls and cultural stimulation. While occasional modelling and session work kept the wolves from the door, it wasn’t until a random encounter at a party that things really started to happen for Rebekah. She got talking to Nouvelle Vague’s Marc Collin, who later invited her to join the band for their forthcoming tour. Already using her artist name LeeLou, she also sang on the band’s last album NV3 which was released in 2009, before turning her full time attention to the project with songwriting and creative partner Paul Simm. Like Rebekah, Paul is no stranger to the music business, sculpting hits for the likes of Amy Winehouse, The Sugababes, Siobhan Donaghy and Neneh Cherry, which has seen his songs grace the charts on many occasions. Finding Rebekah, brought him out from behind the scenes and back into a driving role with LeeLou. The pair met in a Denmark Street studio and immediately recognised that they had found what they were looking for in a musical partner. “She told me about a conceptual art/music installation she was working on and asked me to come along and see it. I knew straight away that she wasn’t just another pretty face with a good voice”. Indeed she is not.