My brains have been scrambled. Radiohead probed my mind… and I liked it.

Radiohead may actually be dark scientists, merely posing as musicians who are highly adept at their craft. Operating at forbidden frequencies, and unlocking aural sequences the equivalent of cosmic code breaking, it seems plausible that this band could cause a cataclysmic celestial event. An event, where formulas and proofs replace measures and movements and theorems and algorithms, substitute tempos and time signatures. 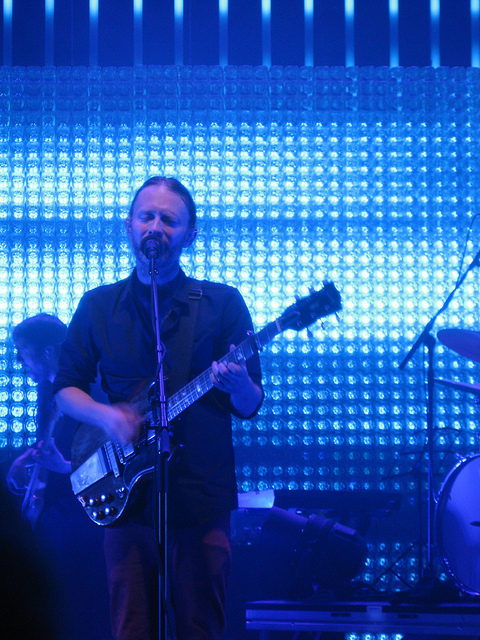 Radiohead was the band that sold us jazz by convincing us it’s rock. But, after witnessing their experimental mastery onstage, a more fitting decree is  – Radiohead is purging our arcane notions of dance music and reprogramming it into something unearthly, maybe even a little unnerving ( like a college student’s introduction to David Lynch).  The truth is, Radiohead is alien. The band speaks an entirely different language than most of us, and live, summon an other worldy sound -both unnerving and beautiful. I heard the death rattle of a thousand dying star systems. Felt the rumblings of  an astral anomaly and ancient planets violently rotating. I heard all earthly matter beautifully swirling towards a wormhole, being replaced by antimatter as it enveloped all it touched. I heard the sound of the apocalypse, and Radiohead were the end of music on earth.  The effects this sonic experiment, caused audience consciousness to disintegrate.  From the front row to the lawn, everyone seized and convulsed in unison, as if losing control over their bodies and minds.

“‘Baby’ has been a staple on just about every playlist/mixtape I’ve assembled in the past 3 years. It is nothing short of sublime.”

Electronic musician / owner and founder of  Clown & Sunset label and art house – Nico Jaar has curated an eclectic but amazing 2-hour mix for BBC Radio 1. The playlist features an adventurous mix of Jay-Z, Aphex Twin, Marvin Gaye, Just Friends, My Girl and Me, *NSYNC, a number of Jaar-related tracks and edits, and tons more tracks.

Indie-reggae band Drunksouls have released a new music video for “Human Race”, made with breathtaking footage from the multi-award winning documentary “I Believe I Can Fly“. The film was directed by Sébastien Montaz-Rosset and based on the Skyliners, a team of French adventurers who specialize in highline  tightrope walking, basejumping, and mountaineering. It won the Jury’s  award at the Vancouver International Mountain Film Festival.

Want to watch the entire original film? – Click HERE to download the film (720p HD) for 4.90€ below, or make a donation via the link.

Listen to the full album below:

Brooklyn indie rock/punk trio EndAnd have announced the release of  Adventures of Fi in Space, a summation of two EP’s showcasing both polished studio and DIY recordings. The band’s unusually gritty sound has earned them comparisons to acts like Cloud Nothings and Helmet.

Allen Cordell directs this new Beach House video for the single “Lazuli” , off of their 4th album – Bloom.

Posted in Best Tracks, Downloads, Independent Music, MUSIC
A Place To Bury Strangers have premiered the second single off their new album, Worship. The song is “And I’m Up” and is available at Consequence of Sound today. On “And I’m Up,” Strangers apply their fuzzy filter to a song the grows out of a more straightforward pop sensibility. It’s something singer Oliver Ackermann calls “that classic 50’s vibe our parents grew up loving oh so much and then cramming down our throats through subliminal early life listening.”
MP3 – A Place to Bury Strangers:  “And I’m Up”

Having released their new album last month, London based quartet – The Temper Trap have a new video for their single “Trembling Hands”;  one of the strongest songs on the album.

After a long hibernation, Grizzly Bear has awoken with their first new single –  “Sleeping Ute”, off the band’s as-yet-untitled new album.  Showcasing guitarist Daniel Rossen‘ s expressive six-string style and “psychedilic tempest” songwriting abilities.  While the title is TBA, the album should be available via Warp on 9/18.

Arguably one of the better hip-hop singles this year, Danny Brown’s Scion A/V contribution, “Grown Up,” now has an accompanying video.  The Detroit hip-hop spitfire reveals the truth about what happened to his teeth, in this childhood-revisited clip,  that follows a young Danny Brown lookalike through various neighborhoods and businesses, causing problems and rapping.

New Sounds from San Francisco – In a Cloud II

Secret Seven Records folluw last year’s  San Francisco-centric compilation, In a Cloud , with 13 previously unreleased tracks from some of the Bay City’s finest. Expect new, blistering tracks from Vetiver, Papercuts,  Sonny & the Sunsets and tons of other artists. For a preiview, listed to the swagged out Ty Segall track and the sweet Grass Widow lullaby – “Hannah Lew”, streaming below. The In A Cloud II compilation is out July 17. Pre-order the album here.

Video – Chromatics : These Streets Will Never Look The Same

Alberto Rossini flexes his directing chops in Las Vegas, Mexico City and Montreal for his collaboration on the new Chromatics video – “These Streets Will Never Look the Same” ( the bands  sixth album single).  Catch Chromatics on their first European tour in two years  here, and back in the States this summer at GvsB II on July 28 at the Granada Theater.

Label: Italians Do It Better

Portland’s Chromatics are yet another band to return to the 2012 musical landscape, after a long hiatus. Matured and introspective and heavier on male vocals, Kill For Love plays out like a warm ocean breeze after dark – a long way from the band’s punk inspired beginnings. With haunting guitar riffs, simple synths, gentle vinyl crack sounds and a re-named Neil Young cover that opens the album, Chromatics craft a dark and beautiful album with cinematic scope.

Directed by Fleur & Manu, the official video for M83 ‘s new single version of “Reunion“ [ off Hurry Up, We’re Dreaming],  is a continuation of the storyline for “Midnight City“.

Watch as  a group of creepy glowing-eyed, paranormal children go to battle. And, keep your eyes peeled for the Adam Yauch tribute.

Stream New Album from Dave Godowsky: All You Love is Need

Stream  Dave Godowsky’s beautiful, indie-folk debut album, “All You Love Is Need,”  recorded at Bon Iver’s studio in Fall Creek, Wisconsin – under the pseudonym John Shade.   It was recorded/engineered by Nate Vernon and features Jeremy Boettcher on bass, Ben Lester on steel pedal and drums, John DeHaven on the horns and The Neave Quartet on strings.

Just RIGHT CLICK on a track and SAVE LINK AS MP3 to your computer. 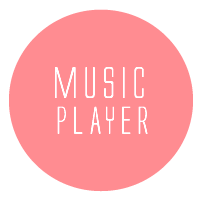 Schoolboy Q and TiRon: “Love Me Not”

Sun Kil Moon: “That Bird Has a Broken Wing”

Chromatics : These Streets Will Never Look the Same (drumless)

How To Dress Well – Ocean Floor For Everything

The Intelligence: “(They Found Me in the Back of) the Galaxy”

Shabazz Palaces give their warped re-take on the new Heems-assisted single from Philly-based Lushlife .  Check the Shabazz-appropriate title: “Hale-Bopp was the Bedouins (Shabazz Palaces remix feat the palaceer, fly guy Dai and Thadillac. mixed by Blood in palaGlow).” The original version, which can also be heard below, appears on Lushlife’s new record Plateau Vision, out now on Western Vinyl:

Grindhouse-esque new video from A Place To Bury Stranger

Posted in Independent Music, MUSIC, Music Video
A Place To Bury Strangers have released a new video for their song “You Are The One.“
Directing duo Matt Moroz & Tracy Maurice deliver a twisted nightmare in this grindhouse-esque clip produced by Greencard Pictures. Shot on 16mm film, their dark, experimental style expertly mirrors the mood of APTBS’s track and elevates the music video to a cinematic noir thriller. Moroz and Maurice’s creation recalls a 70s-era, B-movie that is definitley Not Safe For Work. The duo says, “We really loved the song. The video evoked something extremely dark, weird and disturbing.” In it, the viewer follows a mysterious figure as he visciously beats total strangers, leers at nubile young girls at an underground club, and initiates a blood-soaked make-out session.
«‹1314151617›»