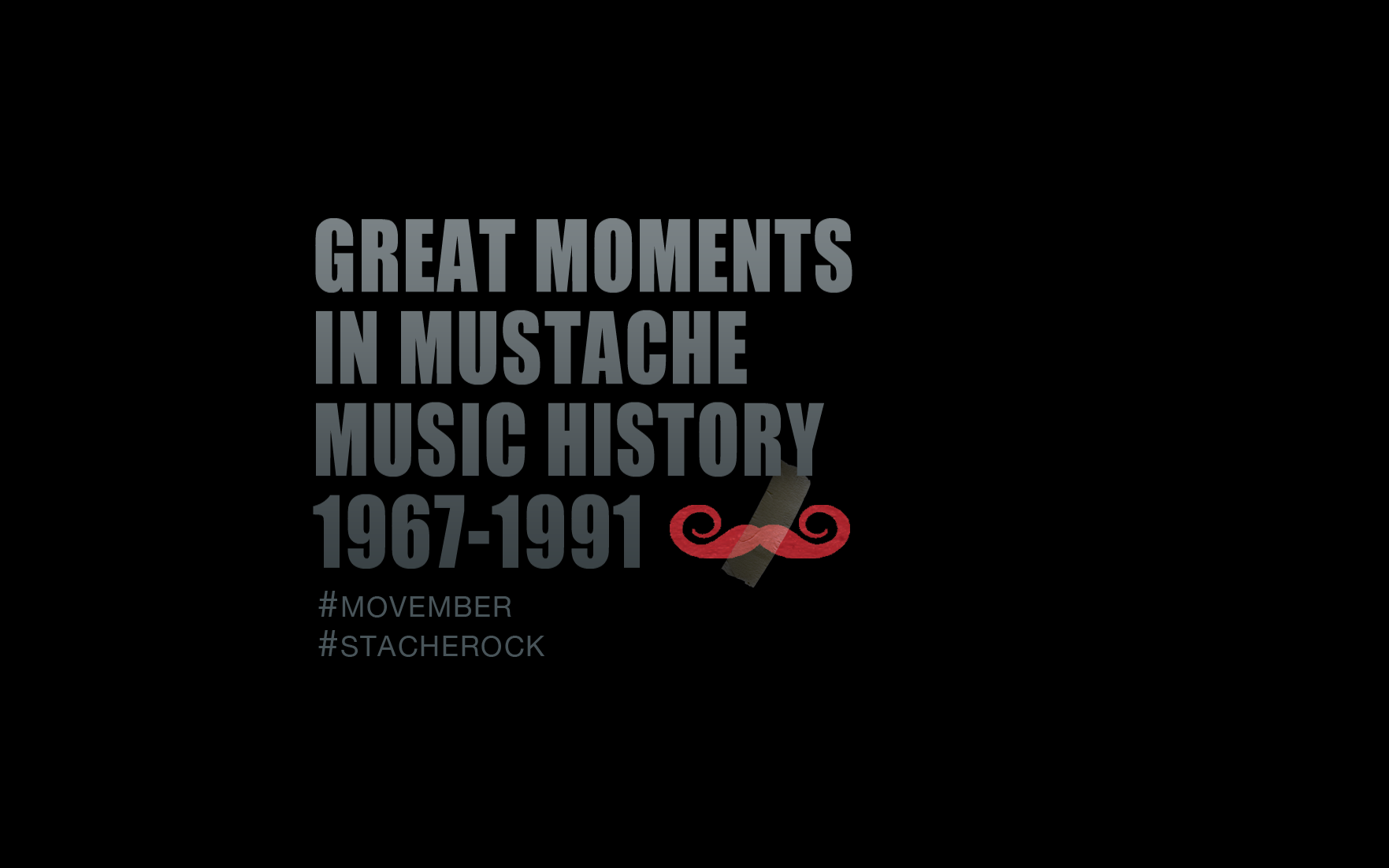 The Mustache has always been a politically-charged form of expression. It’s been banned by kings, forbidden by employers and used historically as a form of social protest.

But for many, the dream is still alive. November, aka Movember (a portmanteau of the words ‘Moustache’ and ‘November’) or Noshember (No-Shave November) is a month celebrated by a rapidly growing cult of men (and brave women) who put down the razor all month, in favor of growing out beastly facial hair.

It is is a celebration of masculinity and personal freedom. It’s 30 days where countless individuals lose their partners, thus spawning the offshoot celebration, “No Sex November.”  Movember is a gateway month for the introduction of other annual flavor-saver celebrations, like Mustache March. It’s a way to lengthen the partying and festivities between Soup Catcher September and Dirty Stache December, which is a month long celebration of “the mexi.“

More importantly,  those participating have earmarked the entire month to raise awareness for a variety of charities and men’s health issues. Whatever you call the Stache, Tache, Tash, Mo, Mouth Brow, Lady Tickler, Trash Stash, Crumb Catcher, Fanny Duster, Push-broom, Poirot, Nose Bug, Cheech or Selleck Sidekick, November is a month to celebrate the nose neighbor in whatever way you see fit.

In the spirit of this celebration,
Discosalt presents: Great Moments in Mustache Music History. 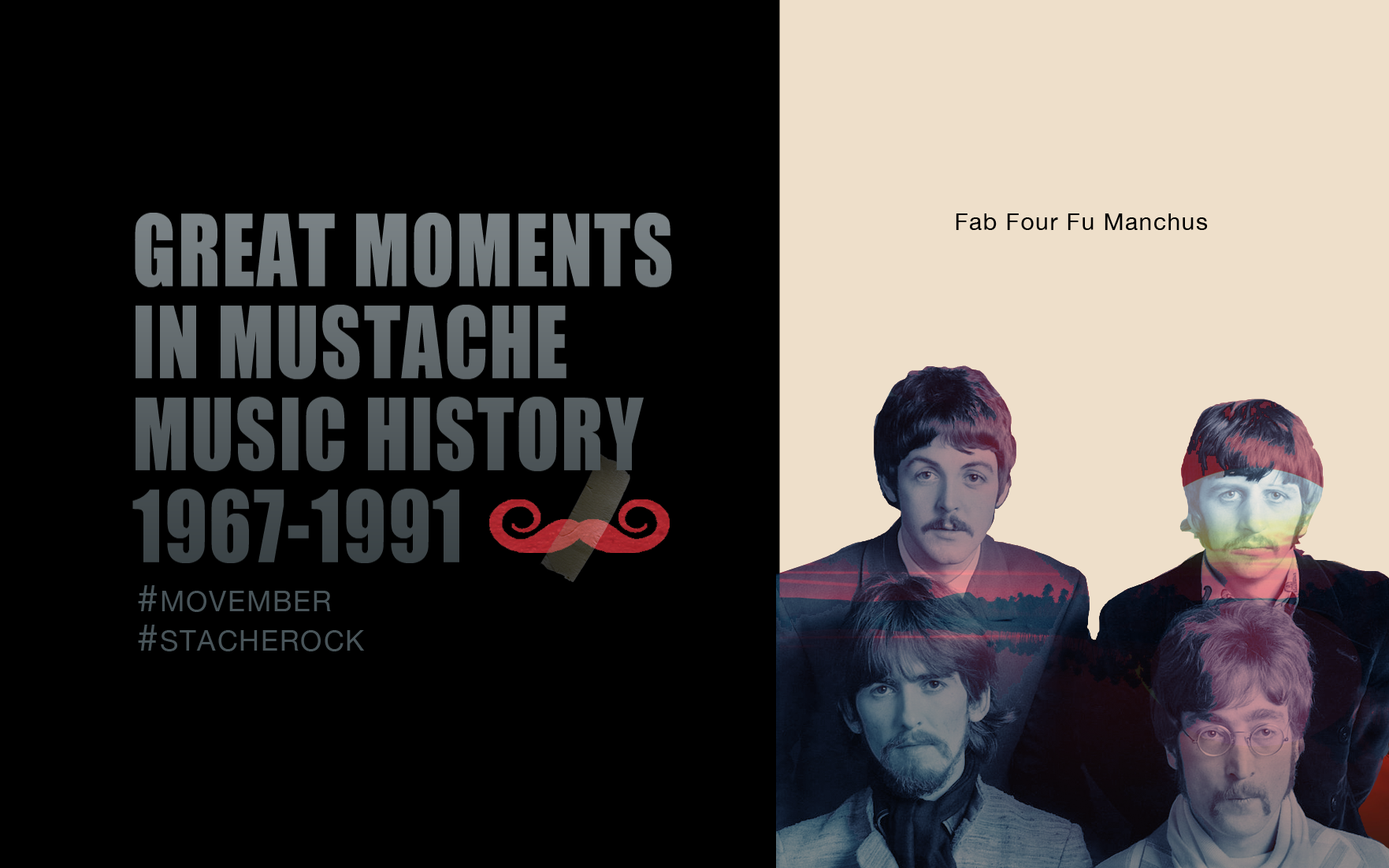 It always comes back to The Beatles.

By 1966, The Beatles had reached a critical, career-turning point. Vietnam, social unrest, rumors of Paul’s death, and Ringo’s “acting career” had pushed the fab four creatively and spiritually in separate directions, forcing their tour to an end that year. Then, in 1967, the band flips the script, reuniting and resurfacing with a new psychedelic sound, the double A-side, “Strawberry Fields Forever/Penny Lane” (later released on Sgt. Pepper’s Lonely Heart Club Band).

For all their media-hyped differences, bandmembers shared at least one [new] thing in common: the mustache. The Beatles take the stache mainstream, putting their differences aside to flaunt a facial hair parade of trippy, fu man chus. In so doing, the Beatles swapped out their baby-faced image to become the first successful four-man, mustachioed supergroup in rock history – illustrating both the awesome, unifying power of the lip rug and its psychedelic musical prowess. 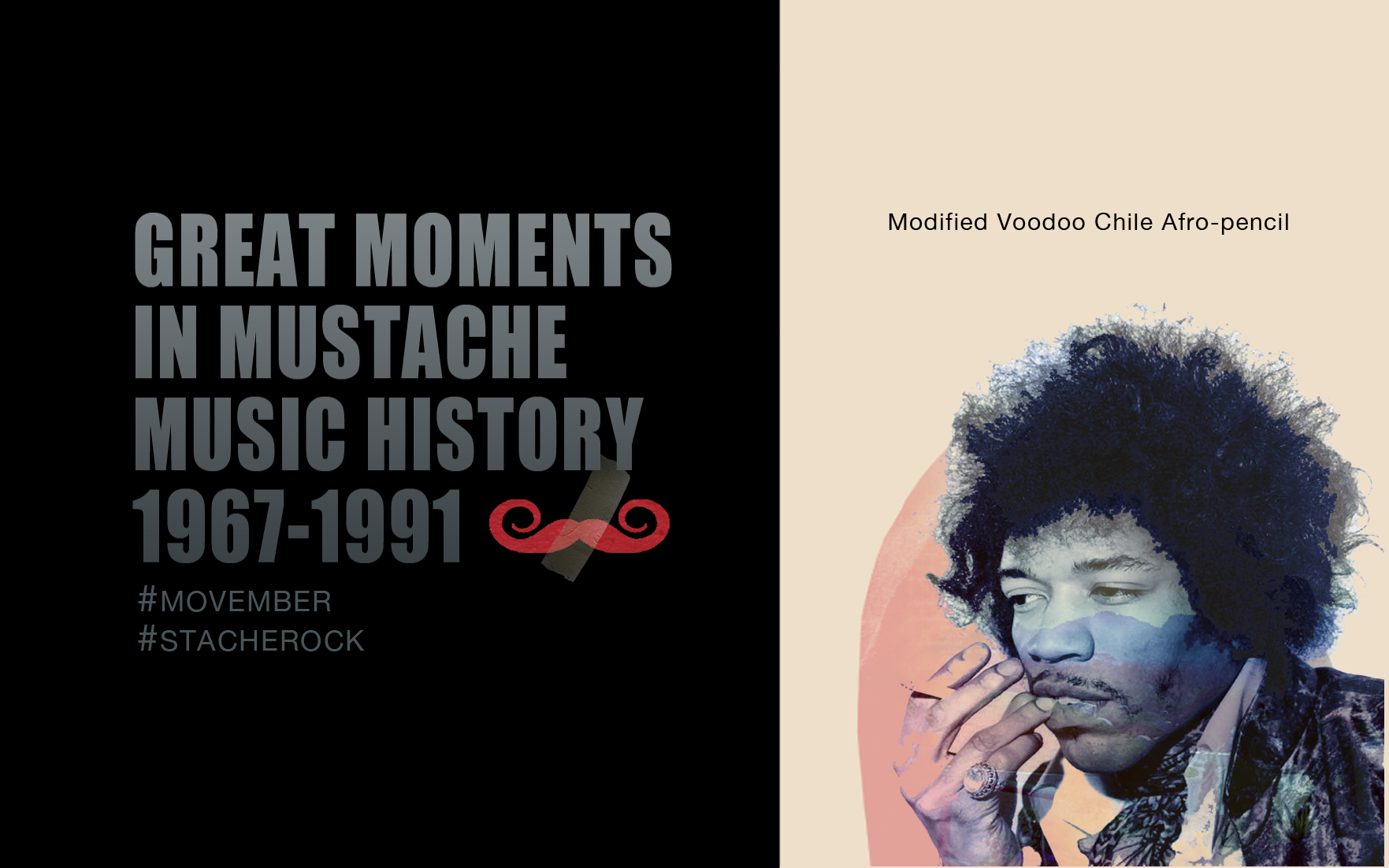 The greatest electric finger-blaster in the history of rock music – and  one of the most exhilarating moments in stache-rock of all time – involved some very groovy lip flair. Jimi’s 1969 Monterey International Pop Festival performance of “Wild Thing,” which immortalized his iconic onstage guitar-burning and smashing spectacle, was only intensified by the dazzling exhibition of a modified voodoo chile afro-pencil, sometimes referred to as, “The Ultimate Experience.”

This achievement is so mind- and mustache-blowing that it stands as a true testament to the transferrable dexterity of the stache and answers the question: was jimi stache-xperienced? 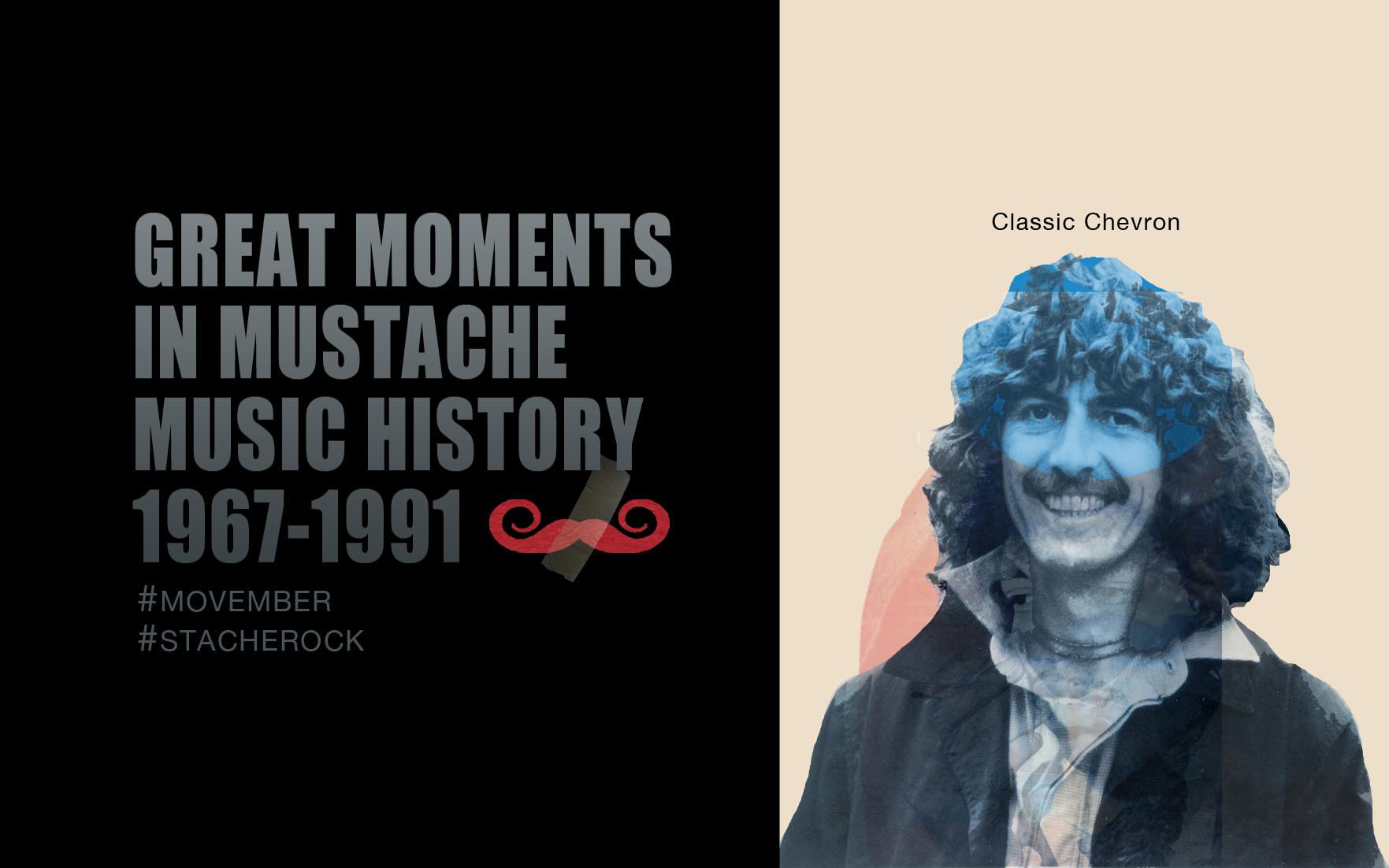 1979: BLOW AWAY
George Harrison resurfaces from a three-year beard stint with the eponymous album release George Harrison. Sporting a very handsome classic chevron and feathered bangs, Harrison spreads an infectious, positive, up-tempo, stache-pop vibe into the disco wasteland of the late 1970s. He also provides a glimmer of light in dark times: a hostage crisis in Tehran, oil hitting $24 a barrel, Three Mile Island, the untimely death of Sid Vicious’, a gratuitous YMCA libel suit against the Village People, and Chic’s “Le Freak” going #1 on Cashbox. Enough was enough.   The world was in convulsions from, not one, but several sucker punches to its proverbial balls.

But the winds of stache-pop are about to blow away those dark clouds.The appearance of George Harrison’s philtrum-warmer – “the yang to [his] yin” – signals a change as well as a celebratory period of domestic happiness for the quiet Beatle – a time of integral vision, peace, jhana, or kwan that often accompanies the liberation of face and body consciousness.

Ten years later, the same fur pelt that saved the Beatles from disbanding in ’69, saves George from a period of personal strife: his album peaks at number 14 on U.S. billboard charts and goes gold with “Blow Away,” which many have interpreted as a lyrical love letter to his own crumb-catcher. George’s message in this ballad is simple: “all I’ve got to do is to, to love you. All I’ve got to be is, be happy.” In fact, the wisdom proffered in these lines is a recurring theme in George’s personal and professional life of the 1970s, as he explores eastern religions in his quest for personal contentment.

“Blow Away” becomes one of George’s most popular solo-stache career hits, solidifying the mouth mane as the true path to success. The simplistic, styled video is pioneering in mustache music videos, introducing the super-imposed, mirror-image profile mustache shot. At the end of the original Concert for Bangladesh vinyl, George sneaks in a subliminal message that, to this day, has yet to be deciphered. It is rumored to be a nod to the Beatles – perhaps some Krishna wisdom. There is, however, a strong case to be made that George’s cryptic message has always been the same: Mustache consciousness is not something imposed on the mind. On the contrary, it’s already inside of each of us, waiting to come out, like fire in a match. Growing a mustache brings out that natural, pure state of mind. We’ll become happy, and our lives will become sublime. Wherever there is mustache, there will be everlasting prosperity, victory, happiness, and morality. 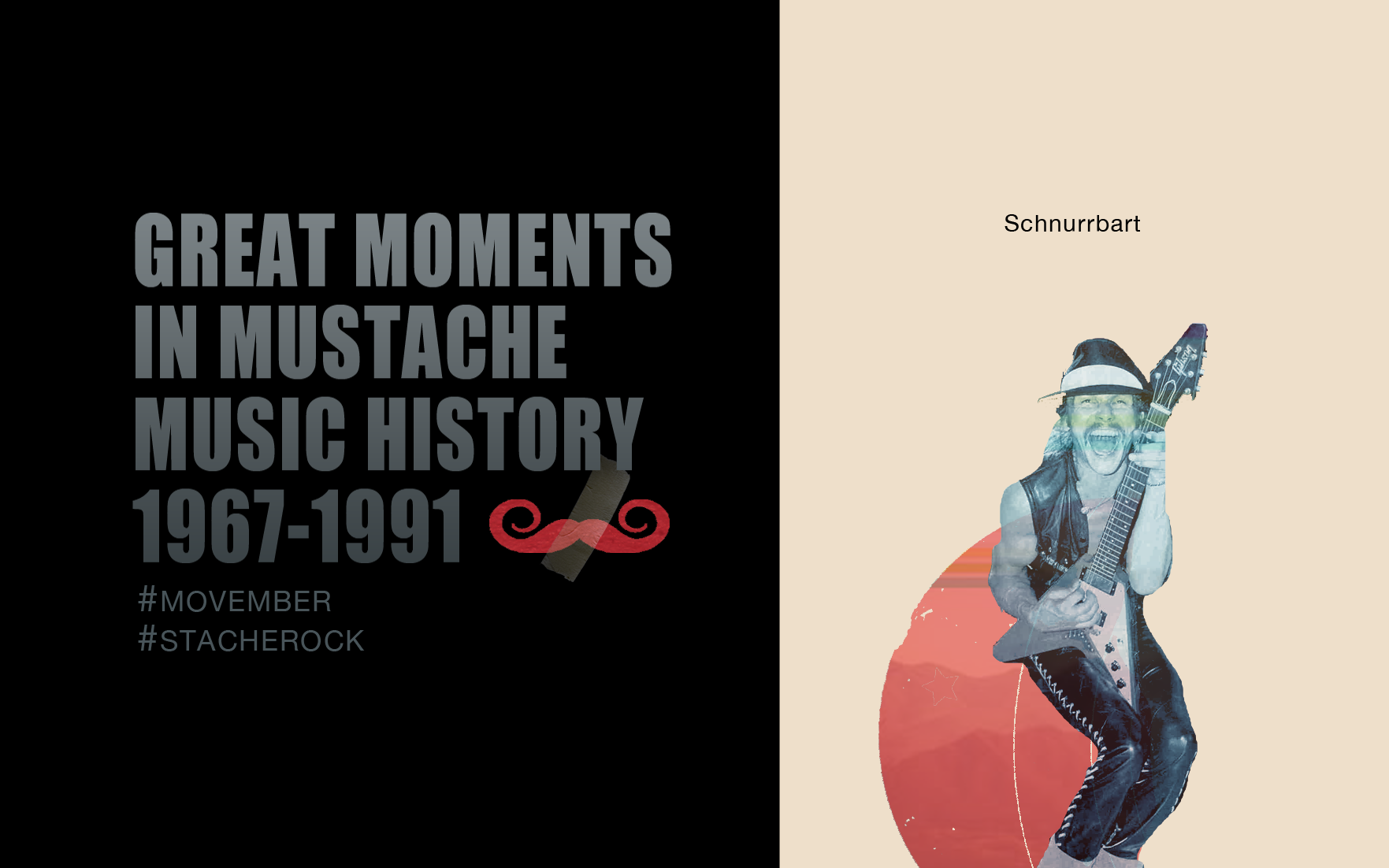 German Rock royalty, Rudolf Schenker of The Scorpions is not only the heart of the face-melting funf, but has sported a schnurrbart longer than anyone else in Hair Rock. His modified painter’s brush even manages to outshine Scorpion front man Klaus Meine’smale-pattern-baldness man-mane. While 1979’s Lovedrive is considered to have been at the pinnacle of The Scorpions’ career, Schenker proved the band had real facial-hair staying-power, forging his stache into the next decade with 1981’s mustache hair band bible Blackout. The band finally cemented its status as Mustache Arena rock superstars with the 1984 release of Love at First Sting, an album propelled by lady-tickler anthem, “Rock You Like a Hurricane,” which broke the mustache out of its cage and into your pants.

The scorpi-stache continued to break down barriers, both literally and figuratively throughout the 1980s, bringing the winds of change to the Soviets on the Savage Amusement tour and becoming only the second western group to “coincidentally” be asked to perform in mustache-revered city Leningrad.  Feel the sting. 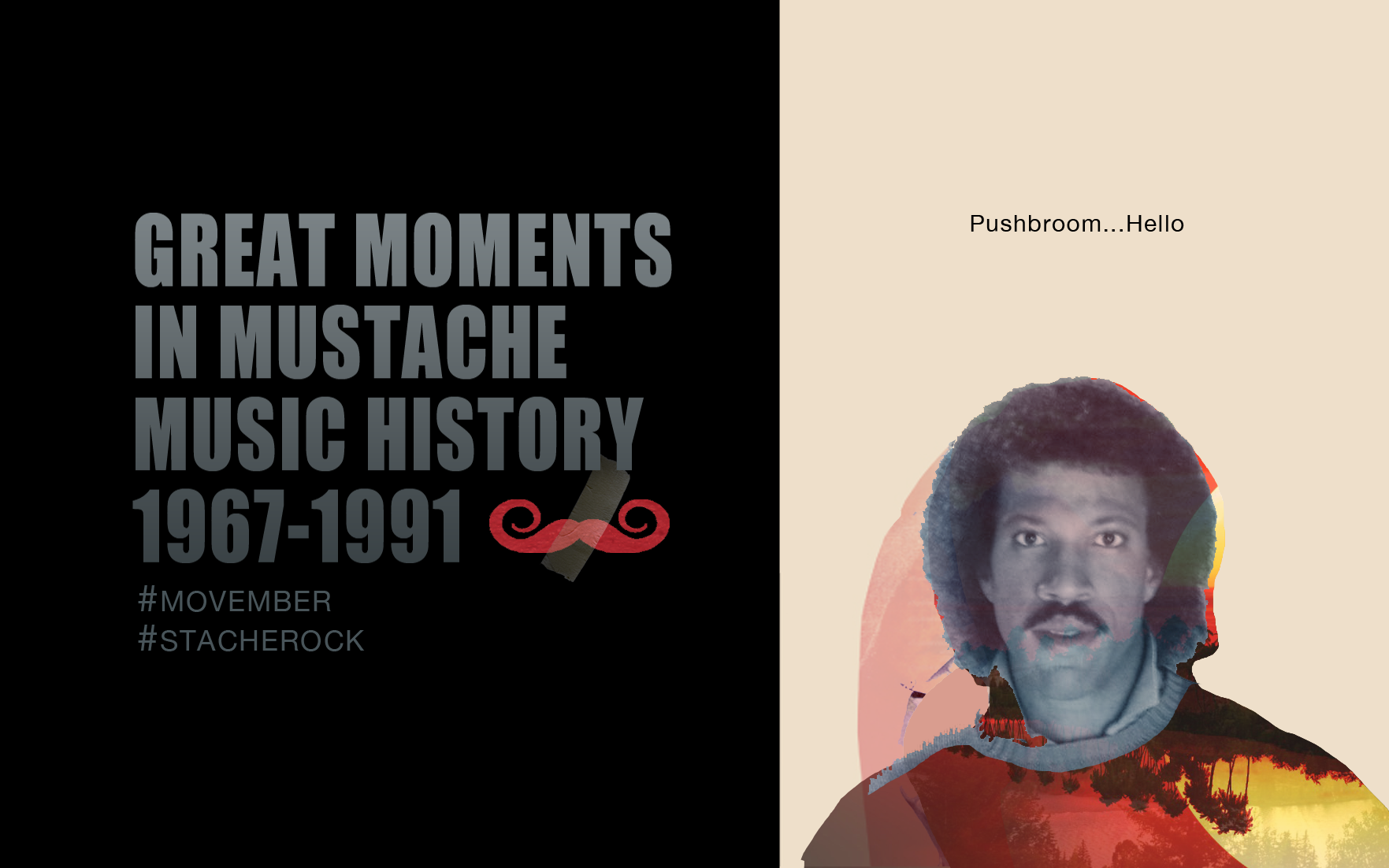 1984: HELLO
The stalker-stache reached a six-month zenith on the adult contemporary charts with the release of  the music video for Lionel Richie’s third single and signature song, “Hello,” from the multi-platinum album Can’t Slow Down. The video, which attracted more attention than the song, features Richie as a bushy chevron-sporting music teacher having a seemingly unrequited fantasy love affair with a younger, blind student.

In a surprise twist ending, the student reveals her shared love for the black dynamite pushbroom by sculpting a clay bust of Richie’s head that resembles Patrick Ewing (Hello, she’s blind).  It’s the creeps but nevertheless, a groundbreaking moment in mustache music history. “Hello” affirms that the stache can, indeed, overcome the creepy stalker stigma to become immortalized in art – and the heart. 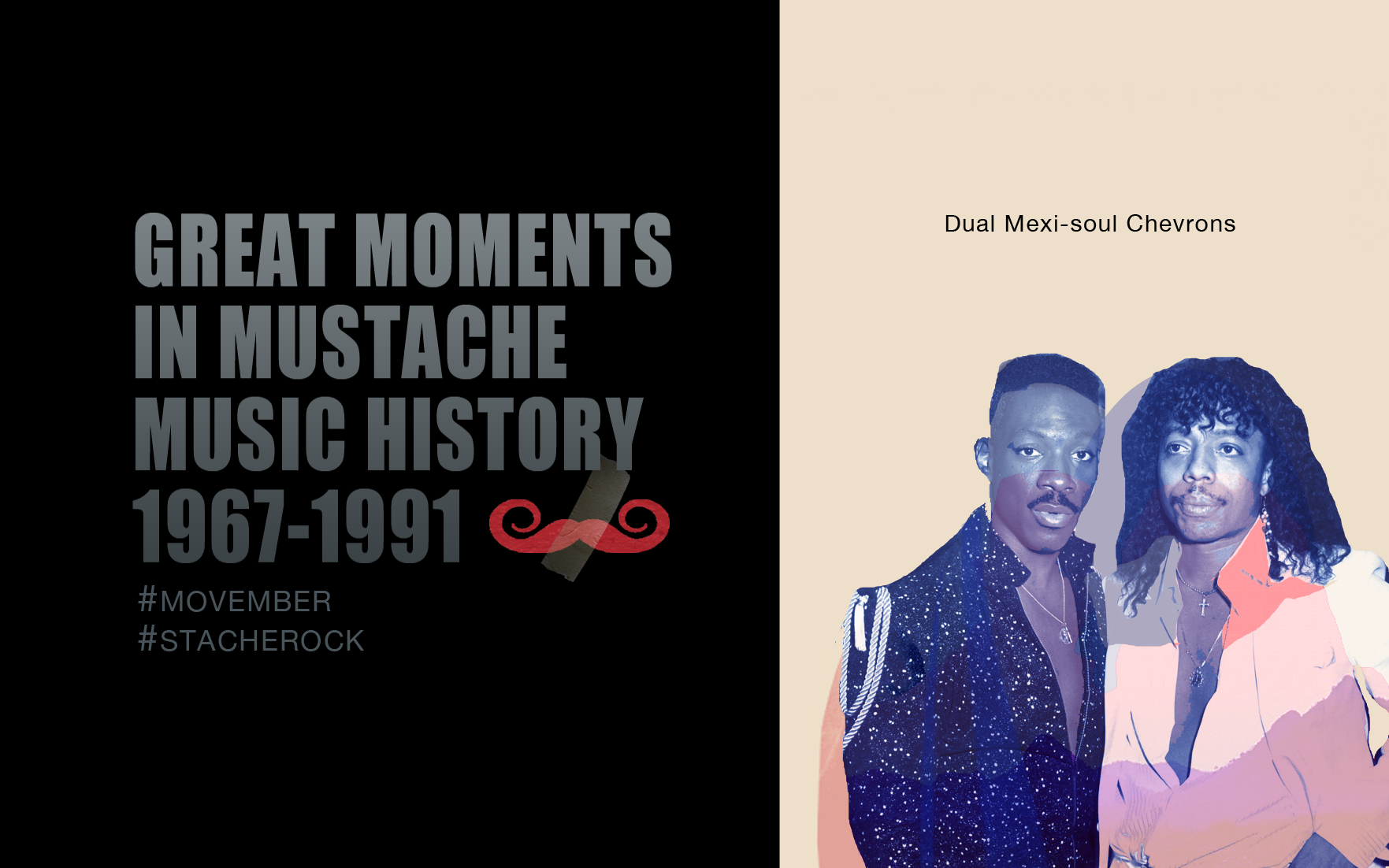 1985: PARTY ALL THE TIME
Beating out New Coke, Nintendo and crack as one of ‘85’s most addictive indulgences, Eddie Murphy and Rick James’ double-stache hit wonder, ” Party All the Time,” marked a bittersweet milestone in Mustache Music History. Fans of the premier ‘70s soul-glow sex balladeer and Hollywood’s Goldenchild doubled their pleasure with not one, but two radiant mexi-soul chevrons performing side-by-side in pop funk fusion.

Not since the 1970s had multiple stacheos so successfully joined forces to make collaborative music history. Sadly, the double facial hair formula was too much for some and proved career-killing for Murphy. Not only did it make VH1’s and Blender’s lists of  “50 Worst Songs of All-Time,” but Murphy’s ‘89 solo-stache follow-up anthem, “Put Your Mouth On Me,” could never touch the success of PATT, sinking him into further music obscurity. 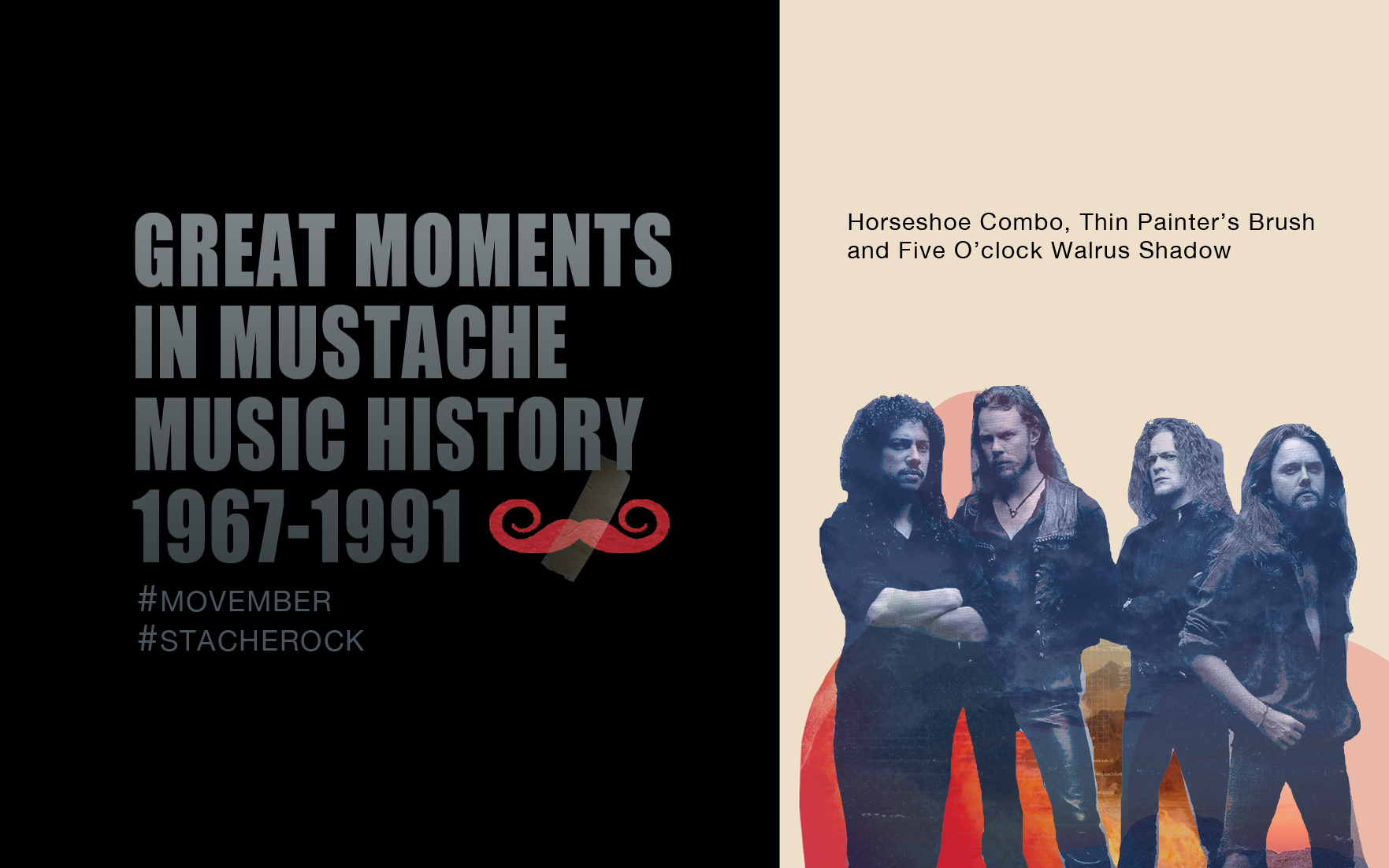 1991: ENTER SANDMAN
Stache-Metal pioneer Judas Priest may have ushered the hardcore machismo aesthetic into metal subculture, but Metallica shanghaied the torch, taking the facial incarnation of anti-authority to the top of the charts and into the suburban mall.  Metallica’s 1991 performance of  “Enter Sandman” in Monsters of Rock in Moscow is not only a consummate moment in the band’s epic stache-metal career, but truly a great moment in mustache music history.

Lyrically, a song about nightmares, this facial hair opera is what dreams are made of — thick, massive walls of sound, cookie monster vocals, amplified distortion, an extended guitar solo, various styled stances of hair whiplash, and the ultimate exclusionary masculine finger at authority: the mustache. The performance yields a triple stache-shred threat with three rhythm guitar tracks of the same riff only marginally shadowed by three mustachioed metalheads; James Hetfield, Kirk Hammett, and Lars Ulrich, respectively sport a beastly horseshoe combo, a thin painter’s brush and a five o’clock walrus shadow. In just one 5:29 minute metal performance, Metallica makes a stronger case for the mustache than they did against Napster.

But the night is darkest before the dawn. Metal subculture had reached its tipping point. Once synonymous with the hardcore-opposition-to-authority ethos, the metal-stache’s image was diluted.  Embraced by suburban middle school stoners and mallrats, a uniformed army of black t-shirt wearing posers with teen molester-stache’s was spawned in the Hot Topic womb and released unto the world, eroding the metal-stache movement of the early 90s. In a devastating move to disconnect the band from the molester-stache, James Hetfield trades his horseshoe for an inverted walrus with extended chinstrap, beginning the band’s slow descent from metal credibility. Exit light. Enter night.

From us to you, Champange wishes and mustache dreams!