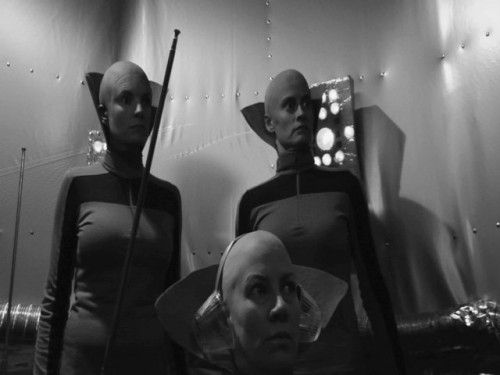 Premiering on Gay Pride weekend, this playful send-up of 1950’s sci-fi follows a group of lesbian extraterrestrials banished to Earth because their feelings of love cloud up the atmosphere on their home planet. Called “A hilarious date movie for couples of all orientations” by the Hollywood Reporter, New York playwright and filmmaker Madeleine Olnek’s feature-length debut is the joyously campy tale of extraterrestrial lesbians banished to Earth to experience heartbreak and rid themselves of love, a feeling that clouds up the atmosphere on their home planet. Shot in expressive black-and-white, the movie lovingly sends up 1950’s-era sci-fi while honestly dealing with the intricacies of contemporary relationships.

THE SUZAN
THE SUZAN are a Japanese all-girl band formed by Rie(Key&G), Saori(Vo&G), Nico(Dr) and Ikue(Ba)-self proclaimed “riot-girls”. They gathered as a band in 2004 after sisters Rie and Saori had created a unique sound more influenced by the dislike of what they heard in Japanese Pop music. The music THE SUZAN plays is absolute original sound that takes in every kinds of music; Pop, Wild dance, Punk, Garage Rock and so on. The results THE SUZAN produce is a fresh sound easy to memorize but an exciting new sound for your soul to fall in love with.

Joshua Milton Blahyi is a murderous Liberian warlord turned evangelical minister in this stirring vérité documentary about the nature of justice and absolution. The man known as General Butt Naked murdered thousands during Liberia’s horrific 14-year civil war. Today this once-brutal warlord has renounced his sadistic past and reinvented himself as evangelist Joshua Milton Blahyi. In a riveting cinema vérité journey that unfolds over the course of five years, filmmakers Eric Strauss and Daniele Anastasion follow Blahyi’s unrelenting crusade to redeem his life. Facing those he once terrorized, preaching where he once murdered, Blahyi is on a quest to save his soul.

JANKA NABAY
“There was also an African apparition: Janka Nabay from Sierra Leone, wearing a straw skirt and singing and dancing to recorded tracks of what he said was a 500-year-old tradition called bubu music. The tracks were modern, and the beat, fast and skeletal and driven by bell taps, was unstoppable, demanding wider dissemination.” -NY Times

Luridly fascinating and darkly comic, Family Instinct is unlike any film you have seen before: a vérité  pseudo-documentary comedy about an isolated town in rural Latvia and a young mother’s patient wait for her lover/brother to return from prison. One part Borat, two parts Eastern Bloc Gothic, and three parts documentary tragicomedy, Andris Gauja’s feature film debut never lets you relax. If you don’t feel a little uncomfortable watching this film, there is something dead inside of you. And yet Family Instinct remains undeniably engaging throughout, making for an unforgettable and surprisingly entertaining movie-watching experience.

BIG SPIDER’S BACK
“The past few weeks have heard me relentlessly blasting Big Spider’s Back Memory Man from bedrooms, fire escapes, and cuddle puddles, and our ecosystem is better off for it. Since Yair shared his Warped EP in 2009 we’ve been huge appreciators of the blankets he so delicately threads and the smiles they bring to our cheeks, and were so grateful for his presence at our end of the year party last December. Memory Man is the debut record we’ve waited patiently for, and these pieces develop a journey carefully traversed through mind explorations. A short glance provokes that of jogging a familiar face while a deserving exposure plants these sounds within background thoughts and daydreams. ‘Black Chow’ has provided me with an anthem, whether the days that pass are sun-drenched or thunder-laden. The drops Yair creates leave room for environment to fill, and his comforting vocals wash into an audible hug for everyone. We love you Yair.”
– thefmly.com