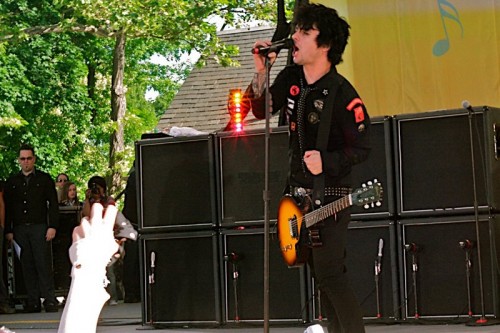 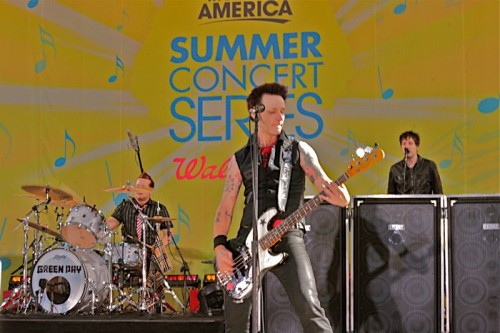 The strangely iconic Green Day has been one of the more important musical influences of mine growing up, from the first time I heard Dookie, investigating their back catalog, and later loving Insomniac (although the others not so much). Today, as part of Green Day’s insane publicity schedule, I managed to catch them performing on Good Morning America to kick off the Central Park Summer Stage series. I have to thank @PopTarts of Pop Tarts Suck Toasted for turning me attention to this show. Arriving at just before 6am to Rumsey Playfield at the corner of 69th & 5th, the line was already well over a block long.

By the time Green Day actually came on, it was around 7 o’clock and they “warmed up” with the new single,  Know Your enemy, as well as an “At the Library” interlude, “Desperate” which GJ performed solo, 21st Century Breakdown, American Idiot, a Surfin USA & Longview.  It was officially the longest and loudest sound check I’ve witnessed.

Following the sound check, the crowd began to get incredibly antsy as the band didn’t come on again until 8:30 and began with a Longview teaser by playing half the song before going into an interview.  The bulk of the performance came from American Idiot and 21st Century Breakdown, the two albums that I am least familiar with.  I recall in the days shortly after Dookie was released and brought to national attention, I instantly fell in love with them and the 2 albums of back catalog they had at the time seemed to speak to the young dreamer in me and listening to them now is reserved for the most nostalgic of days.

Although the park was madly packed, a circle pit ended up opening a lot of space for those of us so regularly determined to make it to the front of the stage only to get crushed.  While New York is the place to have many “firsts”, I can easily say this was my first morning-time mosh pit that I’ve been in before going to work.

Early in the set was one of my favorite Green Day songs, “She” which I recently.  Recently Pop Tarts Suck Toasted listed their 10 most influential songs which makes for an interesting read and you can see my choices (HERE)  The rest of the set consisted of the megahits for the casual fans like America Idiot, 21st Century Breakdown, Jesus of Suburbia, St. Jimmi, Know Your Enemy, and a few others totaling I believe around 8 or 9.  Although the set consisted of the reinvention of the band, their energy remains an impressive constant and they’re such a part of who I am that I will likely always cherish any performance I have the opportunity to catch (although the High School gym in Indiana where BJ played a song while wearing the shirt I’d thrown on stage will forever be among the top concerts of my life).  As always, Green Day makes for a great crossover band as they’re so interactive with the audience, bringing Tolly, a little girl around 9 yrs old from New York on stage to dance along with them, as well as bringing Angie on stage who managed to sing the song just as well as Billie did.  All-around, the long wait was well worth the short but intense performance and were I not having to carry my laptop to work, I’d have spent the rest of the show in the pit rather than the few songs in which I did.  Ultimately though, catching this performance just makes me regret not catching the Webster Hall fan club performance (in which I learned after the event I had a pass to attend) where they played tons of old tracks.  More inspired than ever to grab the back catalog of albums recently reissued on vinyl!

Want some more pics and vids? Check out Backseatsandbar