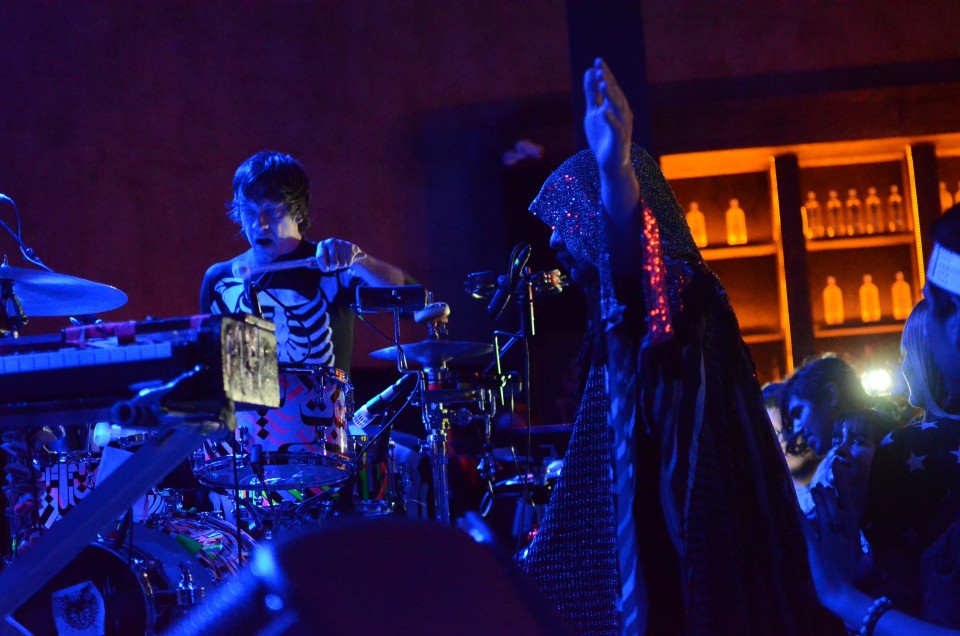 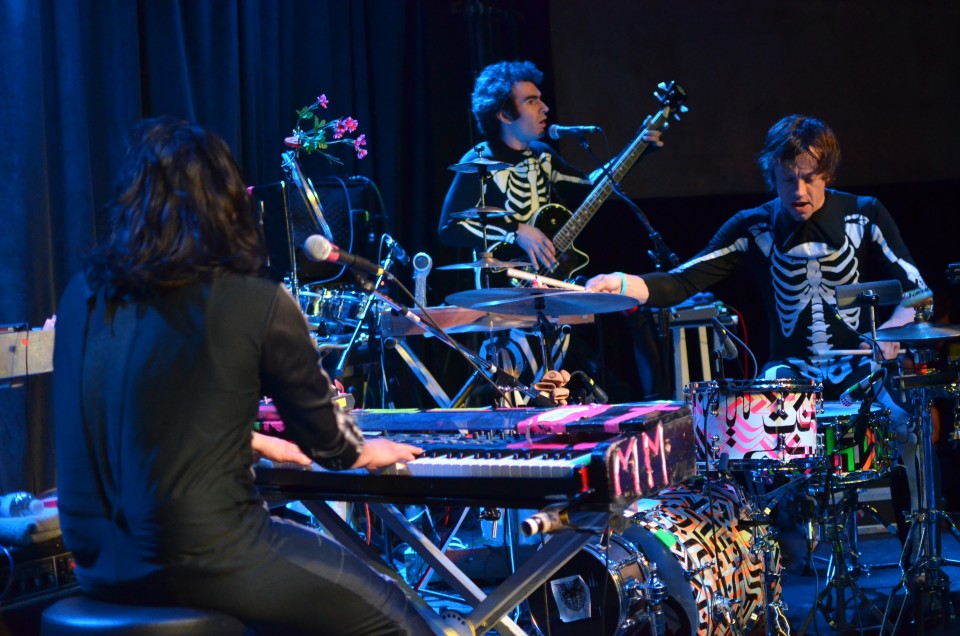 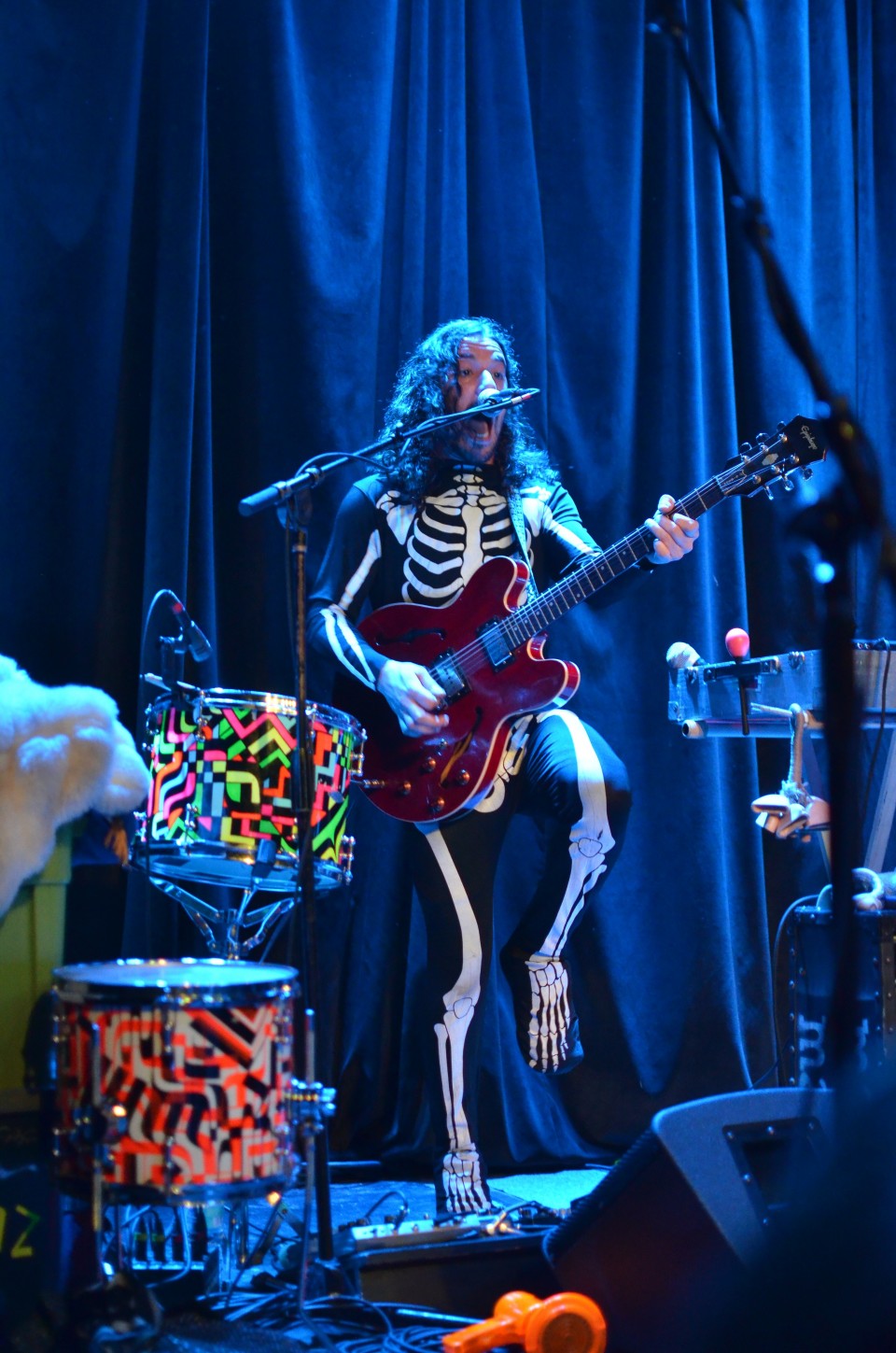 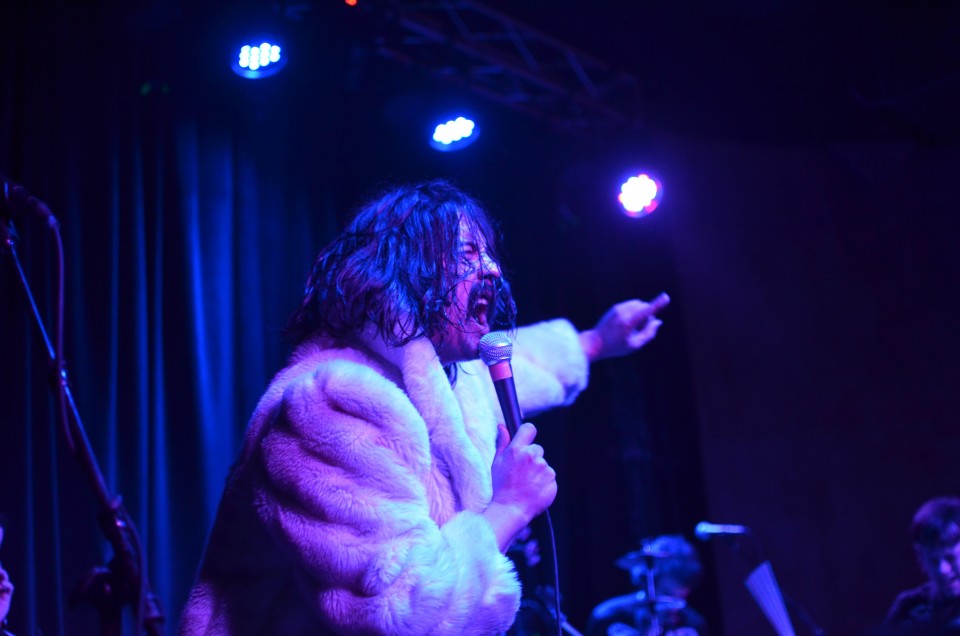 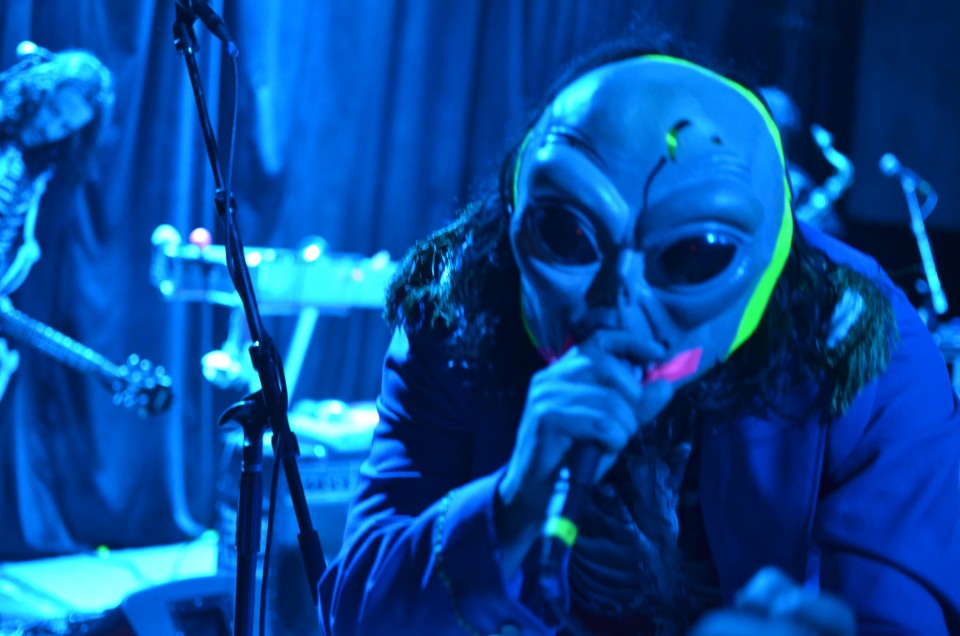 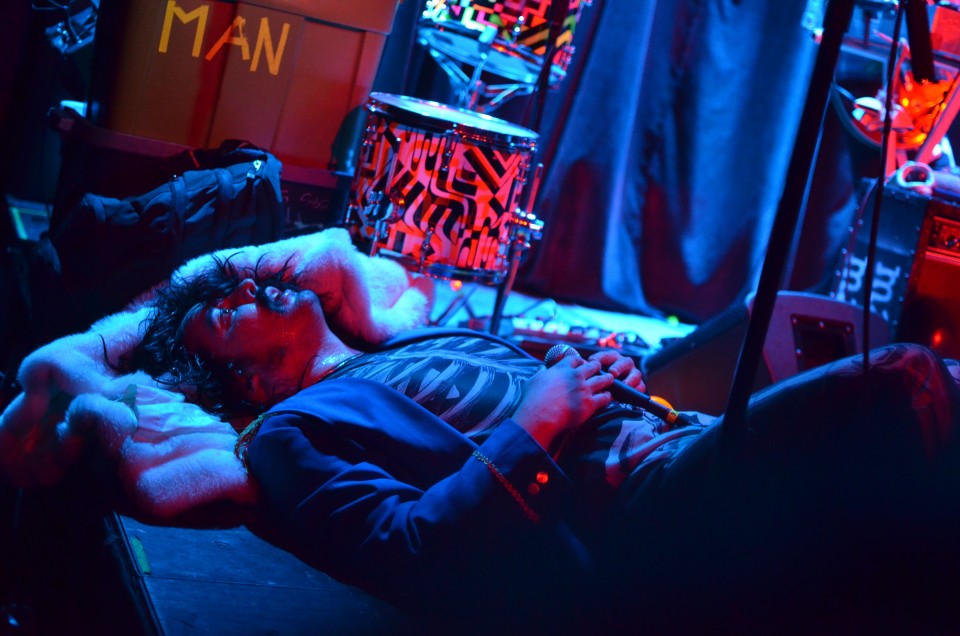 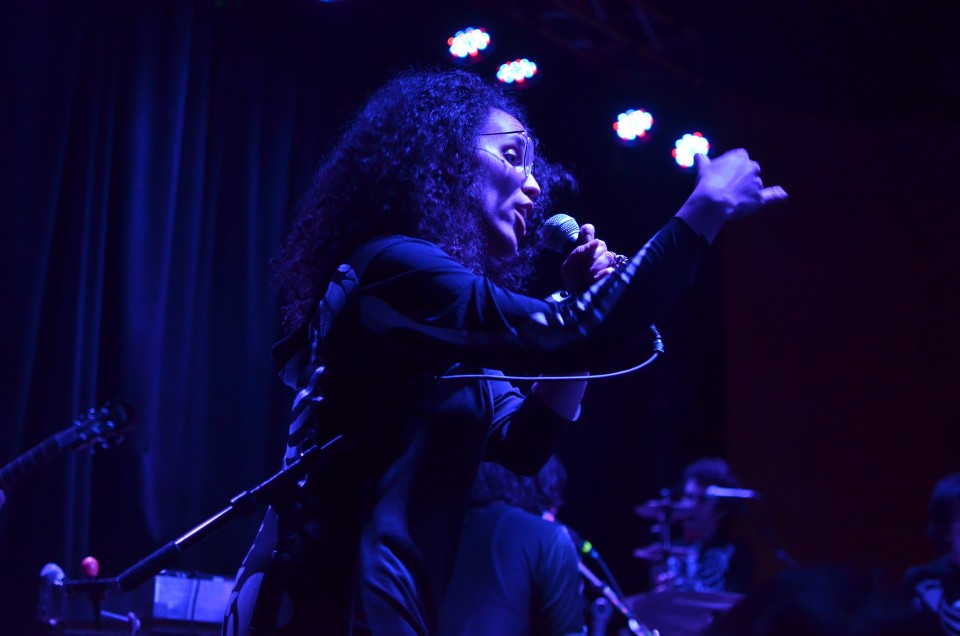 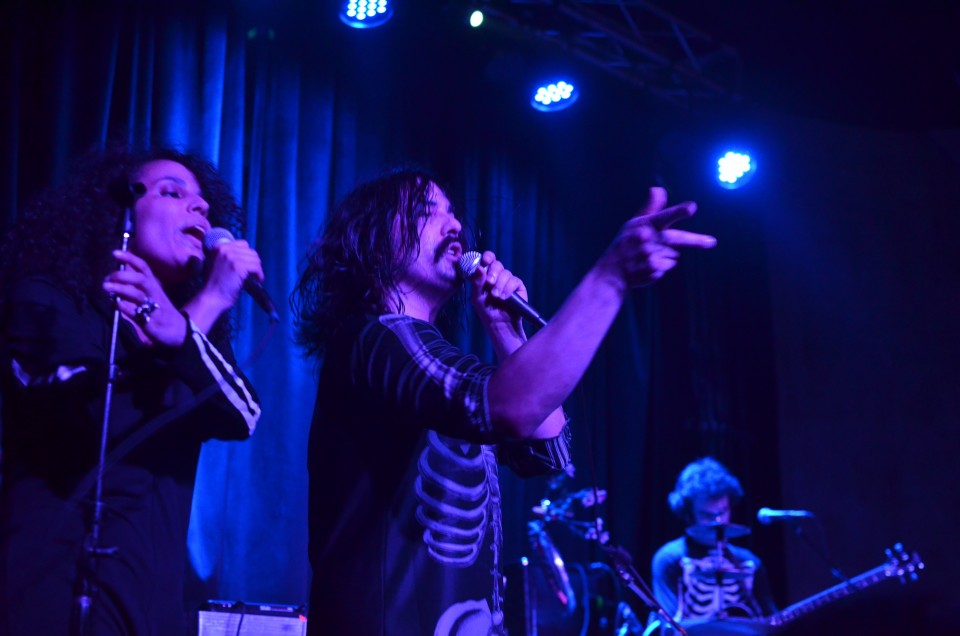 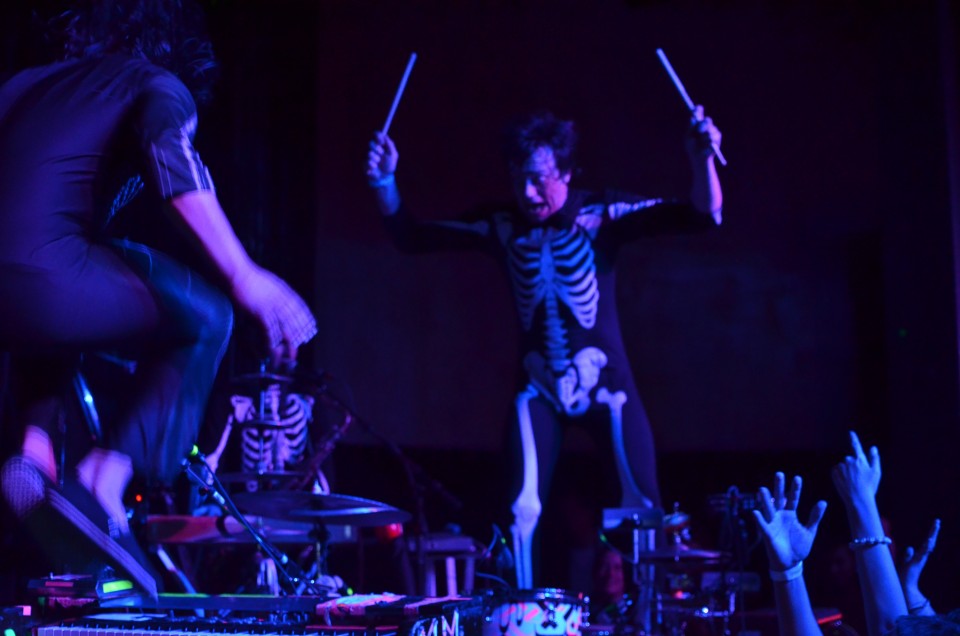 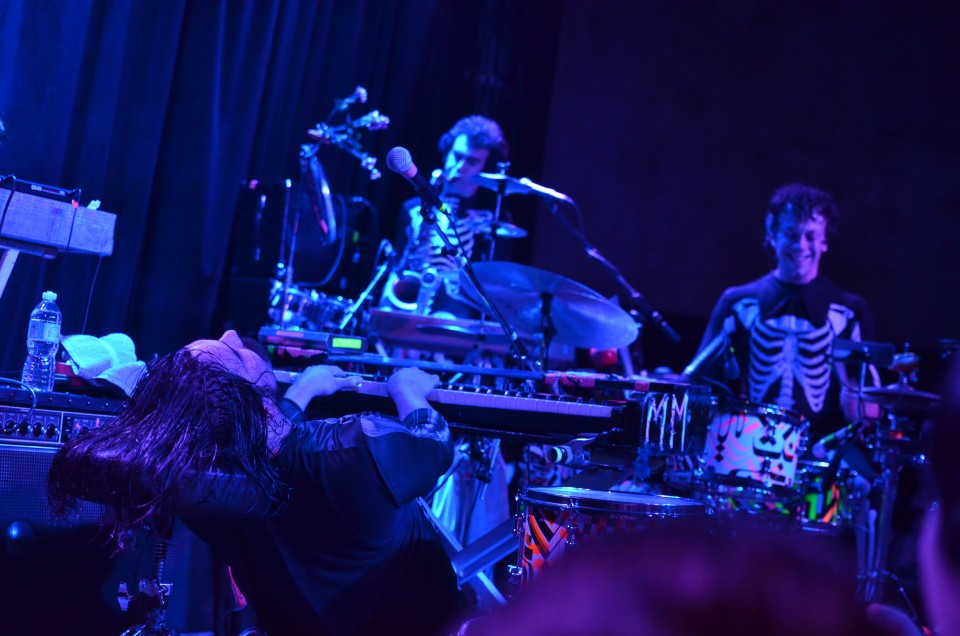 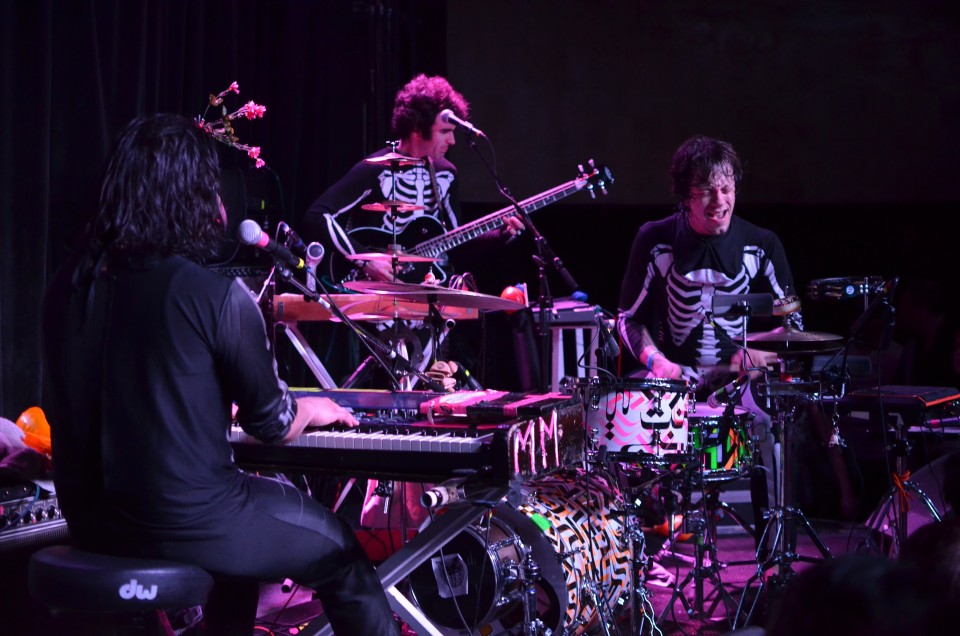 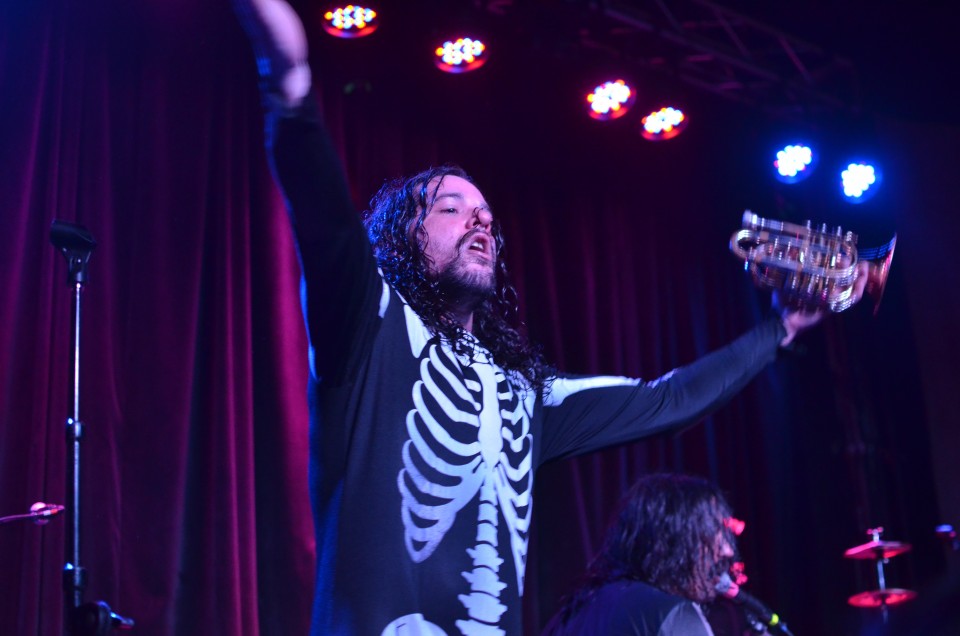 It’s been nearly 4 years since I last saw Man Man perform (Forecastle, June 2010) and seven years since the first time I had the pleasure of seeing them. Following that last time seeing them, Honus Honus commented in a mild-mannered fashion contrary how he liked my smile and would like to kidnap me in order to get my face on the side of milk cartons under the missing persons section. Fortunately for me that practice was stopped in the late ’80s.

On Saturday, in The Constellation Room at The Observatory, it was nice to see that the insanity never stopped. Following the arrival of Pow Pow, Brown Sugar & Shono all wearing matching backwards skeleton costumes (a departure from the tennis uniforms I’d seen a few years ago), Honus Honus arrived donning a sparkly robe in the style of a boxer or priest, back to the crowd, commanding the energy levels of the room rise to the animalistic madness that was shortly to pursue and like a practitioner of black magic, his commands to rise had their intended effect. Launching into “End Boss” from last fall’s “On Oni Pond,” the frenzy began and left nothing wanting.

Honus Honus and Pow Pow both have such fantastic stage presence, particularly the former who reminds me of my two-year nephew at Halloween….trying on every costume and playing with every toy that he can find. That includes a space alien mask, a fur coat, a naval jacket, and of course the aforesaid skeleton costume and robe. Falling in dramatic exasperation a number times, Honus Honus and the whole band at large just seem to have so much fun performing; all actors playing the roles they’ve crated for themselves. And their fans love it…sporting warpaint, headbands, capes and a disproportionally high number of violations of the wearing-a-band-shirt-to-that-band’s-concert rule.

Opener Xenia Rubinos who had a very tribal, animalistic pop-singed set herself, joined for a number of songs in her own skeleton costume, dancing and acting a back-up singer to the madness happening on stage. Her drummer for the night joined briefly just long enough to stage dive.

With a 20 song set they spanned their entire discography in a strangely cohesive way considering the stylistic differences of the later two albums. While naturally the bulk of the set was dedicated to showcasing their latest, Rabbit Habbits also saw a lot of attention and the other three received at least 2 songs, largely all in their epic 7 song encore. Those in the crowd chanting “one more song” at the end of the first set had no idea what they were in store for. As the encore started with “Steak Knives” it became apparent to any Man Man fan that they couldn’t end on such a light note and that wild times were coming.