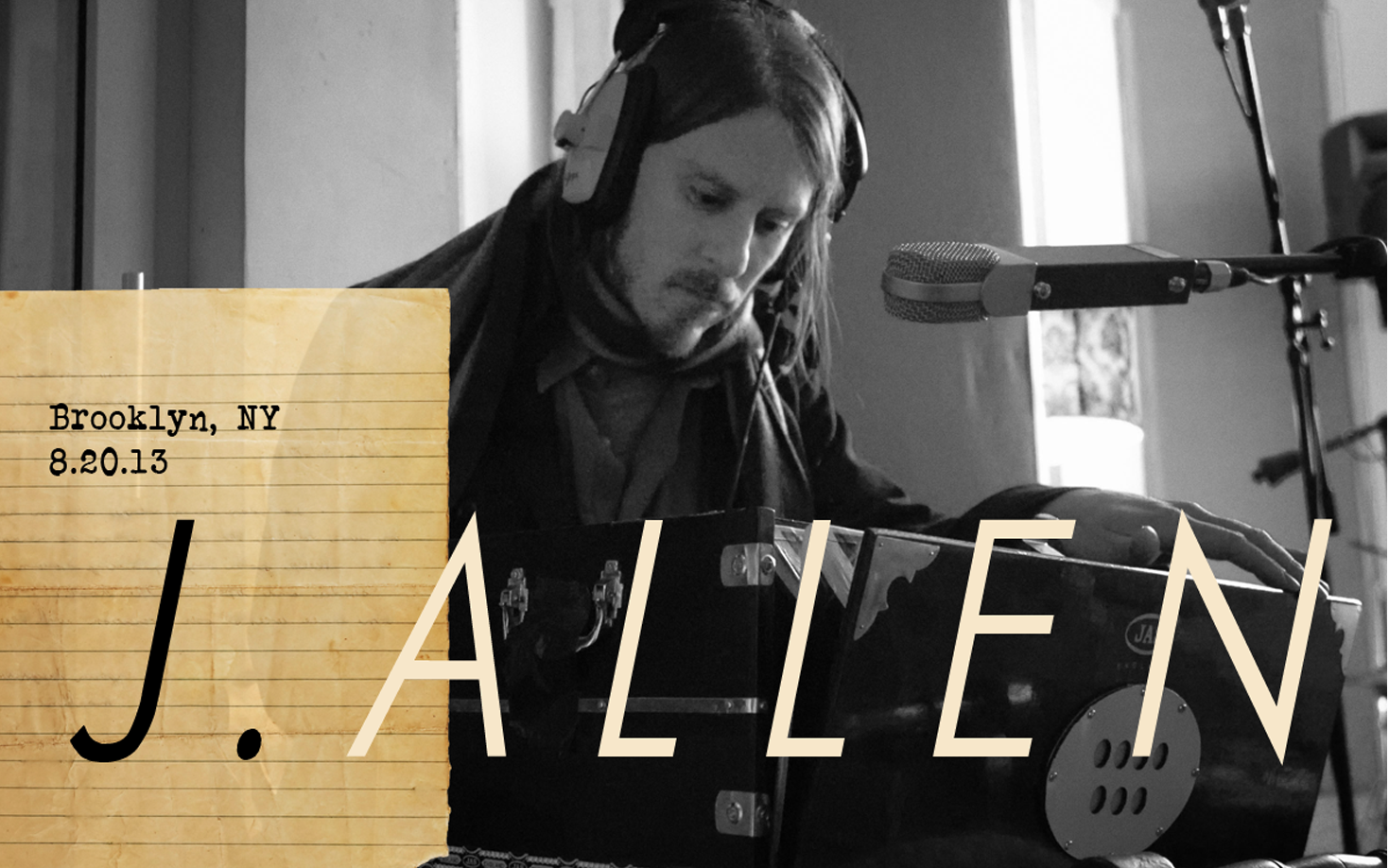 Q + A with J. Allen by Discosalt

J. Allen is the reclusive songwriter and founding member of Brooklyn’s spacey folk outfit Meanwhiles.  In early 2010, finding himself currently unsigned, he began recording and arranging what would become his first ever solo release, ‘Wonder City’. The nine song LP is a true ‘solo’ record on which he writes, plays, and sings all of the parts himself.. except for the street noise and subway rumble.  He captures those ‘on location’ with film production microphones and portable recording equipment. In an affecting combination of sound design and intimate performance each track blends together recordings from different sonic spaces, resulting in a cinematic landscape of a song. A verse might take place on a rainy street…a chorus in a quiet bedroom.

DISCOSALT:  When did you first get the bug for a solo release, outside of the Meanwhiles?

J. ALLEN: I guess I’d always thought about the idea of doing a record where I played and sang everything on it. It’s an interesting kind of challenge, and an interesting set of limitations to put on yourself as well.  Over the years, I’ve always admired guys who’ve been able to do that and make it sound natural.   I guess, for me around 2 years ago it just seemed like the right time.  I was living alone, and I had all these instruments around me.

D: Having worked with your brother Todd since ‘96 and a five piece band,  how was the creative process different for this album? What can we expect more of / less of?

J: Hmm.  Well, working on your own there’s usually less time between the ideas and the recordings.  I’m more likely to go and record something immediately after I finish writing it, and sometimes those are the best moments to capture on tape.  With a band, or working with Todd we’d usually take more time to work things out beforehand, because you’re recording everything at once.

I think also on ‘Wonder City’ there are a couple of songs where basically it’s just me and an acoustic guitar, or ukulele. And, we probably wouldn’t have done that as Meanwhiles.  Todd’s got a huge booming, fuzzed out bass sound too, and on this record I kept the low end very simple.  There’s not too much distortion, but it does come around occasionally.

D: This album really embraces the DIY ethos. A lot of the “sounds” (subway rumble, street noise) were recorded “on location” with portable recording equipment . Did you record the rest of this album in a studio?

J: No, all of the music and vocals were recorded in my apartment.. sometimes with the idea that it really should sound like a guy singing in a small apartment.  I miked the rooms. I miked my kitchen sometimes. With these songs, that just sort of seemed right.  I thought about film and setting a lot while I was writing and recording, and it became clear that the guy singing these songs wouldn’t be in a nice, clean studio.  He’d be in his cluttered apartment looking out the window… or waiting on a subway platform, you know?  Sometimes, the street noise might creep in.. or it’d be raining outside.  And these sounds really became part of the recordings.  I was mixing them in as if they were instruments.

D:  Is Wonder City a New York album, or could this album be about life in any city?

J:For me it’s a NY album, because I wrote and recorded it here.  But it’s hard to say.   For me a lot of the Sonic Youth records are NY records too, but I’m sure they mean different things to different people all over the world.

D: You have shared the stage and collaborated with some amazing artists like Martha Wainwright and Alan Weatherhead (Sparklehorse). How did those collaborations come about? What was it like working with them?

J:With Alan, we met years ago at a release party for an early Meanwhiles EP and he ended up mixing that record with us, and playing pedal steel guitar on later records.  I’ve learned quite a lot about mixing from watching him work.. he just kind of quietly sits there taking things in, making little moves and decisions here and there, and gradually your song gets wider, and taller, and eventually everything just sits right where it needed to sit all along.  He’s got a great sense of what a song needs, whether it has to do with arrangement, frequency, or feel.

As far as Martha Wainwright goes…the first incarnation of Meanwhiles had this big loft in Williamsburg.  We had all our equipment set up there.  And, one day Martha just showed up with a couple of friends of ours.  An hour or so later we were singing old Boudleaux Bryant songs together.  At least that’s how I remember it.. this was a long time ago, and I may have been drinking.  She’s an amazing singer obviously and we had an easy way of harmonizing together very naturally.  So, I asked her to sing with me on a song I had called ‘Long Walk Home’ which turned out really well and ended up on our first record, ‘The Nights Rewind’.  Alan actually plays pedal steel guitar on that one too.

D: Is there anyone that you would still love to collaborate with on an album or tour?

J: Well, I’m actually thinking of maybe working with Alan some more on this new record I’ve just started.  I’ve made a lot of music with Patrick Crowson and Nadine Khouri over the years and it’s always great to record with both of them and to have them as tour mates.  Ruban Byrne who plays a lot with Nadine in London is an amazing guitarist and a damn fine tour mate as well.  He came and played with me at the Reperbahn Festival in Hamburg last year.  I guess I tend to work with the same group of people, mostly.

D:After touring Germany, Austria and the Netherlands, you are back home in Brooklyn now. Are you getting out and exploring the city? What’s the best part of making music here in New York?

J: Nah… I’ve seen it.  I’ve got my favorite spots.  I’ve been recording a lot lately, so that keeps me indoors.

As far as making music in NY, I think there’s something about the city for me that I’m constantly fighting against.  And that energy brings something to the songs.  I do really like writing lyrics on the subways (as my record might suggest).  There’s something about it.. the rushing trains, all the different faces going by…

D: Your vocals have been compared to singers like Michael Stipe and Joseph Arthur. Are there any singer/songwriters whom you have always admired and drawn from in your process?

J: Well… there’s tons of singers that I admire.  I don’t think I draw on anyone really.  I guess think about Emmylou Harris sometimes when I think about harmony.

D: What albums or tracks that were released this year have you been listening to? What soon to be released albums are you looking forward to?

J: Hmm, well I guess I’ve mostly been listening to a lot of older stuff, the early Original Harmony Ridge Creekdippers  records, 70s Leonard Cohen.  As far as new music, I always like what Will Oldham is doing, Nick Cave’s last album was really interesting.  I just got the new National CD, but it’s still in the shrink wrap.   I’m way behind the times.

D:  What can we expect in the future from J. Allen?

J: Well I’m working on new recordings right now.  I’m actually thinking that this batch of songs should be released as a series of vinyl singles.  I’ve got a lot of the artwork already picked out.  I’d like to put them early next year with another tour through Europe to follow soon after that.  In between I’ll likely be peeking me head out every now and then for a local Brooklyn show.

O My Love from J. Allen on Vimeo.