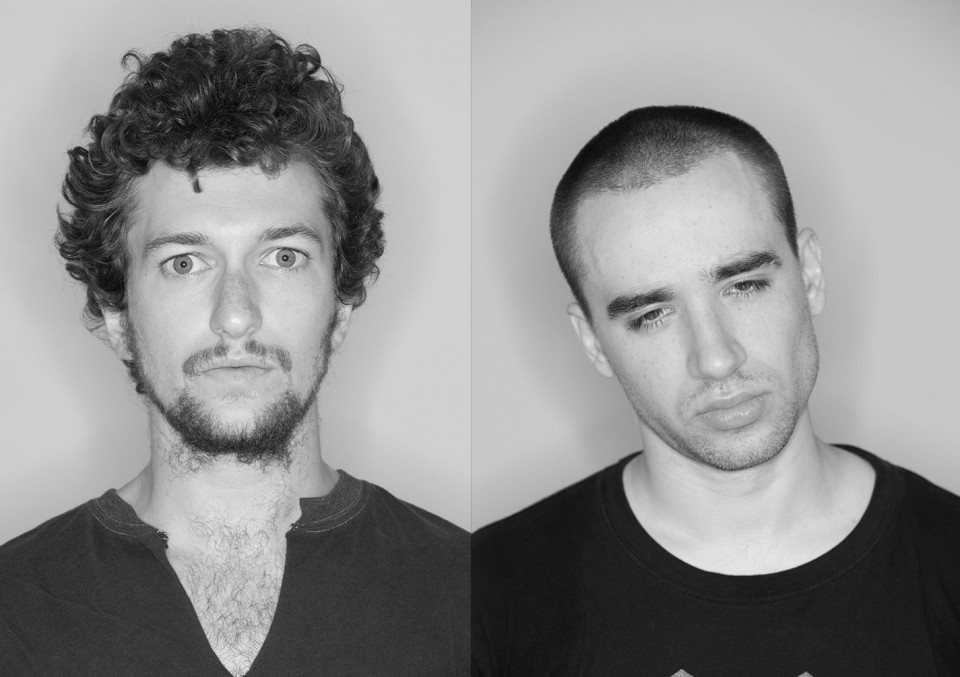 Q+A with Happy Lives by Discosalt

Brooklyn’s Happy Lives trust themselves to get weird and succeed. Together, the intensely creative duo Mike Lande  and Julian Beel) step deep into the absurd and unknown, using DJ software to play rock music to achieve a massive wall of  sound. We recently caught up with Mike and Julian in New York to discuss their “desert island bands”, The macarena and playing NXNE in Toronto this summer.

DISCOSALT: Welcome back to NYC. How was your weekend in Vermont?

HAPPY LIVES [Mike]: Short and sweet. Montpelier reminds me of where I grew up, only my town was dry and made cigarettes 21+. The drive back from Burlington was the best part. Long winding roads. It’s the land of beautiful views. We ran in a field and wondered if you can legally shoot trespassers in Vermont.

D: Where did the initial interest in music originate for all of you? Family? Friends?

HAPPY LIVES [Julian]: I was forced to play piano since I was 4 and I hated it.

Julian: My teacher was Ukrainian and would only teach me songs that sounded straight out of Borat. But with fewer jew jokes.

Mike: My teacher lived in a house covered in dog hair. And then they built an expansion so they could have more space for their dog hair. The interest, though, came from two dudes that taught in the basement of the local music shop. Mark and Vic. I owe them more than I was ever able to express.

D: What was your first album? How did you get it? At what age?

Mike: The macarena single in fifth grade. Is that an album? Third grade? Otherwise Spice Girls. I remember kids in school with older siblings listened to music and I didn’t get it. My dad listened to music. I remember going to him in his chair and saying that I think I should start listening to music.

D: How did you all meet and start making music together?

Mike: Julian and I met freshman year of college in a mutual friend’s dorm-room. I thought he was weird and he had a serious girlfriend so I wasn’t too interested.

Julian: I remember the first time I practiced with Mike in his band Condom Pocket. Right after we had finished going through the first song at my first practice he turned to our drummer and said, “That was horrible.” So yeah, it was pretty unpleasant working with Mike and I ended up leaving even though I thought he was onto something. And then a year or so later he sent me a track he just finished working and it blew me away, and I wanted back in. That was Slacks. He’s a lot better now. Most of the time.

D: Where do you all live now and what’s the best part of your neighborhood?

Mike: Bushwick. Best part is the rent and running trails.

D: When I listen to the band, I hear everyone from NIN, Nirvana, James Blake to Weezer. What artists have influenced the band’s sound?

Mike: My desert island, all-time, top-five most memorable acts, in chronological order, are as follows: Nirvana, The Beatles, The Pixies, Joy Division, and Ariel Pink’s Haunted Graffiti. Favorite singers are Frank Black, David Byrne, David Yow, Paul McCartney (only Beatles), and Ariel Pink. Plenty of new music floors me but most of it still feels transient. Kendrick Lamar is a great vocalist.

Julian: You covered Chrome Sparks recently. His stuff is blowing up my brain right now.

D: How do you describe Happy Lives’ sound to someone who hasn’t listened to the band yet?

D: Your first EP really captures the energy and chaos of live music. It’s grimy and messy but the delivery is totally focused. Do you prefer the experimentation of playing music live or the control of recording?

Mike: That might be a trick question. The EP is chaotic because it was uncontrolled. Piece of shit drum kits in concrete basements through $50 microphone kits. The basic idea was take big DJ effects and put them on rough, almost cruelly barren live samples. I get to step back and tweak and be a mathmagician but without that raw first draft it doesn’t work for me. That’s why WMP sounds so garbagey. It’s recorded through the built-in microphone immediately after I finished the lyrics; the uncertainty in the voice is strong. Any attempt we made to do it better sucked. We tried. There’s something about intending to record that fucks with my brain. I’m struggling with it right now.

Julian: The live part is the entire thing for me, Mike hands me a finished track and I need to figure out how to convert it. It’s equal parts loyalty and molestation. I have to figure out where I want it, whether its on the piano roll or as a time-based trigger. Should we extend one part, reverse it? Can we mashup this part of the song with another? And ideally there should be at least one part where I can smash the keys at random.

D: If you can categorize your first EP. Do you think it is more of a heartbreak album? or a party album?

Julian: I guess it’s like a party album except in the middle of the party you get carried away, fall in love, lose it all, and then you crazy and start screaming about your gums. Then you rock out pretty hard while taking the dive, but then you remember that you should have known from the start she’d part in few. And if you sing about it pretty enough you’ll get a new one.

D: What’s a record that heals heartbreaks? What’s one that makes them worse?

D: You have been touring all over the east coast. How have the fans been outside of New York?

Mike: Thrilling. The house parties have been the best. Don’t pay too well but each one has been packed tight. It’s been wild.

Julian: The fans have been great and I haven’t had sex with any of them.

D: Do you have any crazy fan stories? What’s the story with those ladies at Berks in Philly?

Julian: We played this one show in some town in Pennsylvania full of biker/rockabilly types and no one wanted to talk to us except this girl who was trying to get laid. Neither of us were interested, but when I went to the bathroom Mike told her that I was into her, I was just really shy, and she should basically just force herself on me.

D: The new single “Feeling Right” is a completely new sound for the band. Where did this song come from? What was the process behind recording it? Is this the band’s new direction?

Mike: Haha. I shouldn’t laugh. I know it’s a fair question. I was in my concrete closet and it came out. I was playing the drums and humming the verse melody without words, thinking that it was too long and laborious. Then I realized it was better as a duet so I sang the voices and wrote the lyrics that fit the characters. I don’t see it as a new direction. The idea of the band isn’t to be one style; we change and want to make different music. The goal is to trust yourself to get weird and follow an idea regardless of yourself. If it gets ugly, or gay, or electronic, let it.

D: Do you feel like you are all in a different place from when you recorded your first EP?

D: Do you feel like the music scene in New York and Brooklyn is in a different place from a few years ago?

D: What’s your comfort record for lazing, the one you can always go back to?

D: Can we hope that Happy Lives will play another Discosalt Party?

D: What’s next for you guys?

Julian: We’re playing NXNE in Toronto on June 14 and Northside Festival the next day in Brooklyn. That’ll be interesting.

Mike: Finishing the record. Looking at a Fall release.