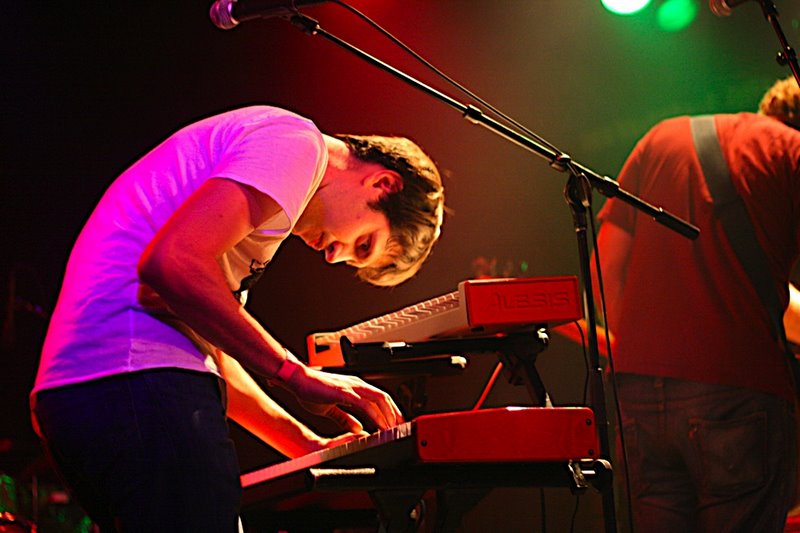 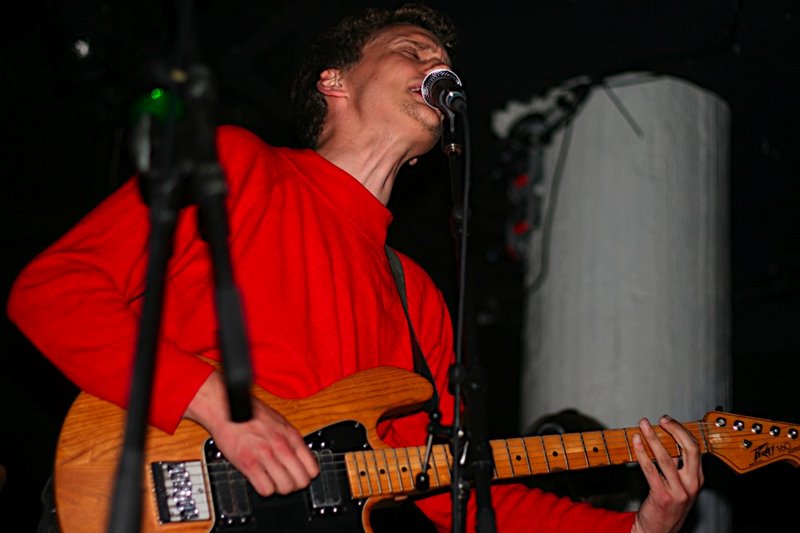 Clues have penned the perfect band name. The whole band has managed to remain seemingly shrouded in mystery, a mystery that slowly seems to only unravel through their live performances. Who are Clues? What do they sound like? Why all the hype?

Clues came to New York’s Santos Party House last Wednesday.Having been both a fan of the Unicorns and Arcade Fire, Clues makes for an intriguing supergroup. Nevertheless, supergroups tend to fall flat in my opinion and whether it is egos getting in the way or trying to meld the sounds of the bands from whence the members came, it rarely appeals to me. For that reason, I was slow to pick up the Clues debut. However, once I finally did, I’ve hardly put it down. Having expected quirky Unicorns-esque lyrics over heaver chords, I was shocked to find one of the truly greatest rock albums I’ve come across in a very long time. Zach over at We Listen for You gave the album a perfect 10.0 score, and offered quite insightful analysis of the thematical elements of the album. Perhaps most interestingly was in pointing out the most beautiful and intriguing line from Haarp…“Will I be able to feel the difference…when you turn me on and off?”, to which they suggest the band views themselves as detached and any sort of “fame” to be fleeting.

I recall my feelings after having seen Arcade Fire (and the comparison isn’t merely because of Reed’s former time with the band). Having listened to Arcade Fire, I didn’t know what to expect but in seeing them I left saying quite simply that that was what a rock band should sound like. That is exactly how I felt leaving the Clues show. These guys played with an intensity and passion and brilliance that few bands can pull off. As noted above, the lyrics that pour out of this album have a timeless quality to them and ask very deep questions…something far too few bands are doing these days. At the same time, each member of the band was an instrumentalist and played them all with shockingly incredible skill. Additionally, I feel as though the band were doing some pretty amazing things, particularly with Reed on drums, but the utter darkness of the stage prevented me from seeing much of anything happening on stage (despite being in the first row). I would have really enjoyed seeing the band as they performed.

The set started off with an interesting tribal sounding intro and included most all of the album, including Haarp, You Have My Eyes Now, Cave Mouth, Crows, Remember Severed Head, and closing the set with the ecore Let’s Get Strong.

Starting off the night were the very talented Bridges and Powerlines. I had come across their debut some time ago and instantly enjoyed what they were doing. Synthy almost twee beats with often fairly minimal vocals and frequent harmonization, Bridges and Powerlines leave everyone in the crowd in a better mood than they’d been an hour earlier. Their track Uncalibrated (link)is one of the more lyric heavy tracks and shows a kind of depth that makes them appropriate to play with Clues, claiming “I could make it cold inside just by being here” and I imagine the fight that would ensue. I really enjoyed their performance and highly encourage that you check them out. Start with the track above and go deeper from there.

Drink up Buttercup was the disappointment for me of the night. For a band I’d heard so highly of, I was sad to see that the gimmick outshined the talent. Any regular reader knows that performance and stage presence is critical to my concert experience and I love bands that add something to change our idea of what a concert should be. First we’ll start with the positive…their animation made for a photographer’s dream (which is why they grace the front photo and the headliner’s flash photos take a backseat). Now for the negative….the problem was that singer James Harvey and Mike Cammarata seemed to be the only two trying to focus on playing their instruments while the other two would occasionally hit notes between dancing on stage or hitting things. We noticed garbage cans before the show and figured they would be a part of the act as they looked like they’d taken an unnatural beating. I was reminded of Stomp, except that in Stomp other surfaces were struck to create an interesting sound whereas here it seems it has more to do with making them look cool (it doesn’t). I rarely find myself so annoyed with a band, but Drink up Buttercup can proudly claim to have been so inane and pointless as to have provoked my fury and frustration. Also, it could have been that Ben Mazzochetti reminded me a little too much of Andy Sanberg who in turn makes me think about Joanna Newsom and thinking about Joanna Newsom while watching Drink up Buttercup pretend to be a band could cause loss of hearing, vision and lead to insanity. James and Mike need to go their own ways.