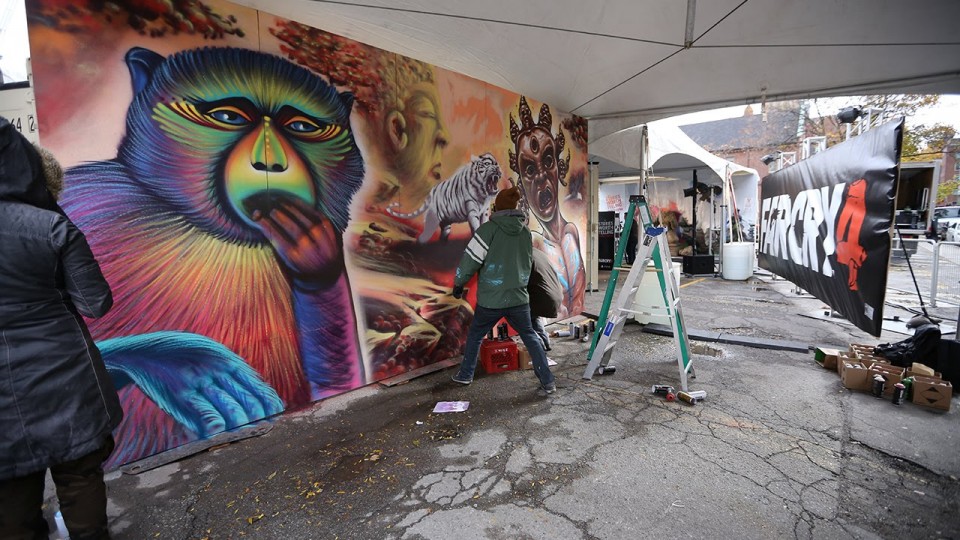 For the uninitiated, the launch of a highly-anticipated video game can be, in many ways, similar to a movie premiere. Parties are thrown, members of the press are called over, and in some cases, murals are painted.

This was the case when Ubisoft launched “Far Cry 4” in November of last year, and the game developer, showing a great interest in street art, not just commissioned artists to create two murals inspired by the game for its launch, but also threw a street art gallery event to allow fans to interact with the independent artists who created the in-game murals. The street art gallery event gave attendees the chance to experience the game firsthand, as well as watch artists create three in-game murals and win prizes.

Ubisoft also commissioned artists David Loran, Nick Sweetman, Bruno Smoky, Shalak Attack, and Jeff Blackburn to create two large murals inspired by the game, and according to The Canadian Press, while the artists braved the cold weather to pull off the project, it also helped them get a feel for the game. ““Far Cry 4,” due out Nov. 18, is set in the fictional Himalayan region of Kyrat. And the artists must have felt they were right there on the weekend, braving chilly two-degree conditions while creating their art in a downtown Toronto parking lot,” writes Neil Davidson.

“Far Cry 4” received overwhelmingly positive reviews from critics when it was released, as it follows the current trend of video games now incorporating more than one genre into their gameplay. Similar to how Spin Genie has incorporated action-adventure elements into the slot genre, “Far Cry 4” created an open-world adventure that allowed gamers to experience a new, vastly interactive world every time they entered the game. In the game, players are able to encounter various wildlife from the Himalayan landscape, as well as explore villages and settlements to immerse themselves in the culture of the fictional country the game takes place in. These served largely as the inspiration for the mural.

David Loran has had experience creating murals of all sizes, both indoors and outdoors. The elephant mural he created for Ubisoft took him 6-8 hours, as he rendered it digitally before starting work with his spray-paint cans. “The difficult part was doing this dust powder effect, kinda like in the game,” Loran says of the experience. “Apparently, in “Far Cry 4”, a lot of the characters turn into powder, and it’s like a whole new thing, like a look that their game has.”

The rest of the mural took much faster to complete because it had multiple artists working on it at once. Shalak Attack has posted a video of the creation of the mural: