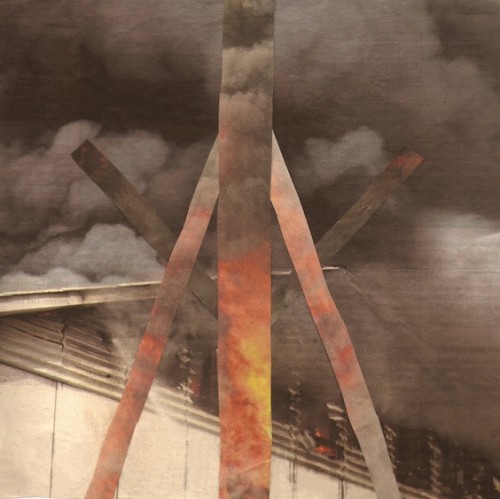 Anger, anxiety, maladjustment and nihilism are all impulses that legions of teenagers combat daily. In Copenhagen,  four teens are not merely scrapping against these demons, but waging an outright war on them.

Meet Iceage: a Danish punk outfit, whose rowdy live shows have delineated them the poster children for a “new cult of violent youth” – just have a scroll through the bloody post-show photos on their blog.But their new album New Brigade, substantiates the band as much more than a group of gashed-head exhibitionists and young, brash, noise makers. In a musical climate so over-run with baby-soft indie pop, New Brigade  is a refreshingly angry, visceral exercise in contained chaos and high-octane energy output. The album is a post-punk call of arms for loners and anarchists, alike, and easily one of the best punk records I’ve heard in years.

You only need listen to the exhilarating “feedback made to sound like galloping” first few seconds of opener “White Rune”, to get immediately drawn into the relentless, dark, fast-paced grip of this record.  Singer Elias Rønnenfelt belts out jumpy modernist angst ridden chants “I am White Rune!”, rioting the song into a furious Gang of Four-esc bounce that burns itself out in just two minutes,  before the listener even has time to catch their breadth.
Running just about 23 minutes, buried beneath scowling layers of heavy distortion and sloppy garage noise, New Brigade is, at it’s core, a faithful re-interpretation of early Joy Division, and New York No Wave. But for an album brimming with such over-worked post-punk , atmospheric goth and hardcore, New Brigade manages to infuse all three genres with a raw, new energy. The result of which, naively sounds as if the foursome discovered their “new” sound all on their own,  independent and oblivious to the last 30 years of music. And, for a band whose average age is seventeen, maybe, I even believe this.