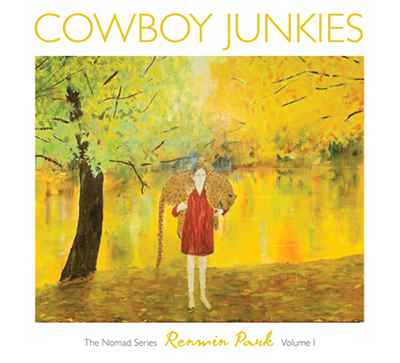 Somewhere in the recesses of your early nineties record memory, you probably remember the Cowboy Junkies cover version of The Velvet Underground’s “Sweet Jane” on the Natural Born Killers soundtrack. Well, the band is still together, and one of the few bands that has lasted so long with their original line-up intact. Fewer, still, have created as consistently satisfying a body of work, since 1985 with some milestone albums in the nineties that chronicle the bands creative path which has remained impervious to trends in popular music.

For the first time, the band is now completely free of any recording contracts and obligation and they have recorded a new album  Renmin Park. Inspired by a three-month stay that Michael Timmins of the band spent in China—which he describes as “an other-worldly experience”— Renmin Park is the first of four releases planned over the next 18 months, collectively titled “The Nomad Series.” Renmin Park (translated means,”People’s Park”) is a celebration of the sights, sounds, and characters of Jingjiang, a small town situated on the Yangtze River. Several of the tracks were actually built on loops made from “field recordings” that Michael made in China where he recorded a myriad of sounds from music and conversations—from badminton games to students chanting their lessons. The album also includes covers of songs by two of the country’s most important rock artists.

This album will soon be followed by Demons, on which Cowboy Junkies will cover the songs of their late friend Vic Chesnutt, who passed away in December 2009. “His catalogue is so deep and, for the most part, so overlooked,” says Michael. “It will be a labor of love.” The final two volumes of the Nomad Series will be titled Sing in My Meadow the contents of which are still being discussed and The Wilderness, a full album of new songs. The band’s recently revamped website will play an important role in the Nomad Series by taking fans inside the creative process. Timmins adds that the band will be blogging about the series from the inception to conclusion of each album and will be posting demos, works in progress, rough mixes and the occasional aborted effort. After all four volumes are released, plans call for a book that will delve into the character, nature, and inspiration behind each of the albums. It will be published by Whale and Star, the publishing house of the band’s friend Enrique Martinez Celaya, a Cuban-American artist whose “Nomad” paintings helped inspire the series. Michael sums up the band’s motivation for taking on such a massive project quite simply. “The main reason for wanting to do it,” he says, “is that, as we steam through our twenty-fifth year, we feel that we have the energy and inspiration to pull it off.“

Check out a free MP3 Download from the band below:

Just in case you cant find that mix-tape your girlfriend/boyfriend made for you in junior high, here’s one for old time sake: